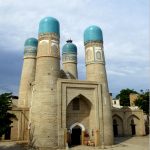 I awoke to clear skies. What a pleasure! Finally! It seemed like a good day to look around the countryside a little.

I arranged for a taxi to take me to the main sights ($15) On the way the driver pointed out vineyards and fruit trees saying that the new President was finally moving away from King Cotton. The thirsty plant has ruined the soil. He blames it on the Soviets but actually the late strongman  Karimov enthusiastically continued the destructive policy.

First stop was the Bahautdin Naqshband Mausoleum. It was busy with worshippers and a few tourists. Restoration was pretty heavy as it is considered a holy spot. It’s partly because the region embraced his brand of Sufi Islam that the more extremist Wahibi brand never gained traction here. 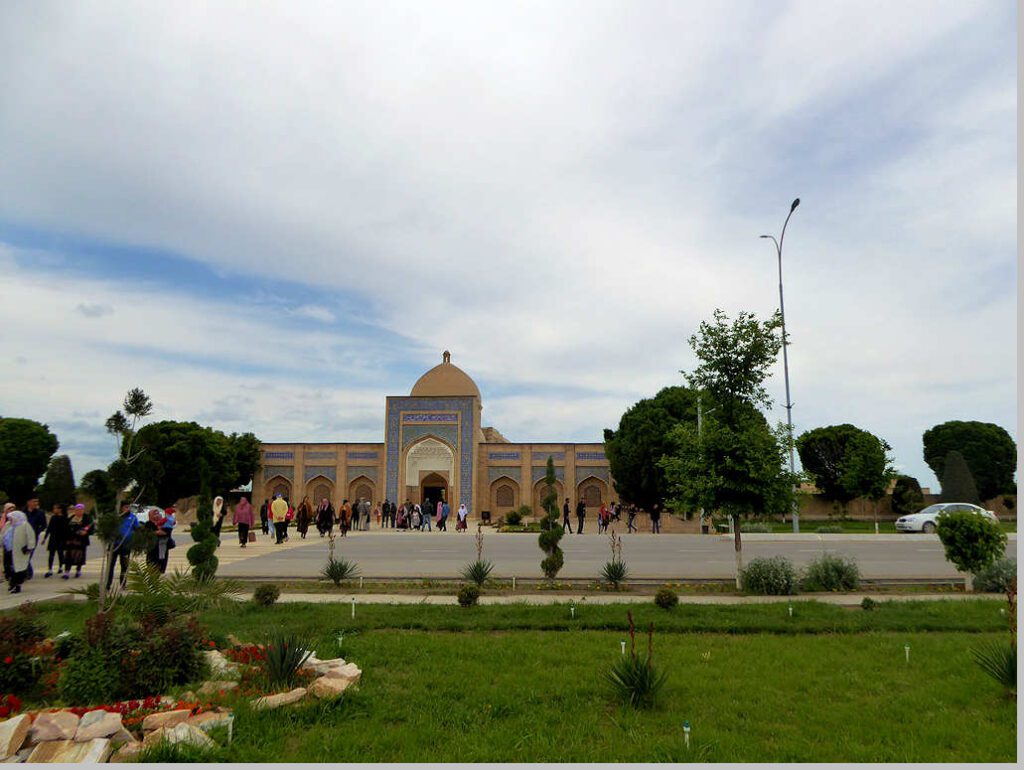 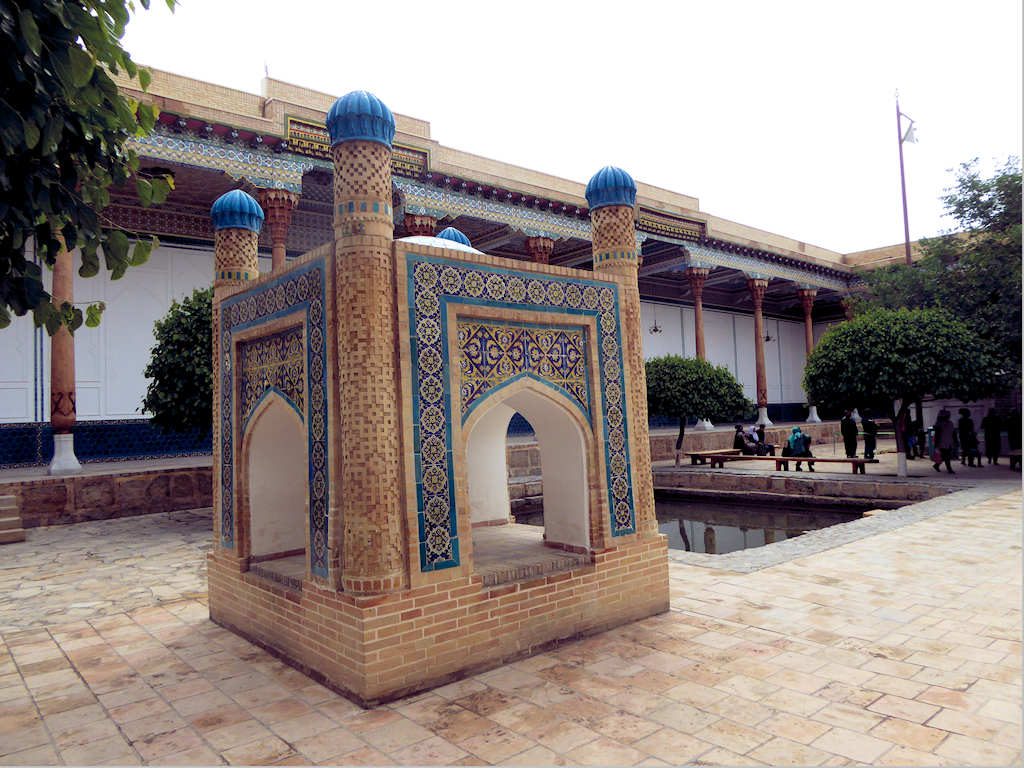 Then there was the petrified tree which allegedly sprouted on the spot where BÑ stuck his staff after returning from Mecca. 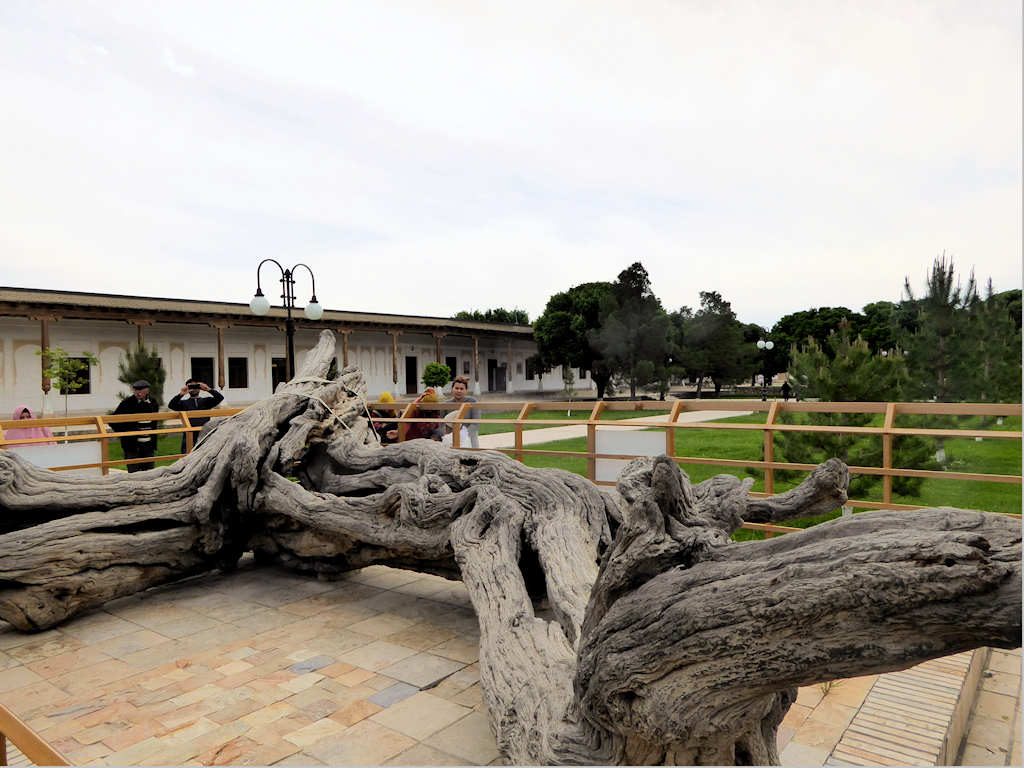 His tomb was the focus, protected by a horse tail, which is a Mongol custom. 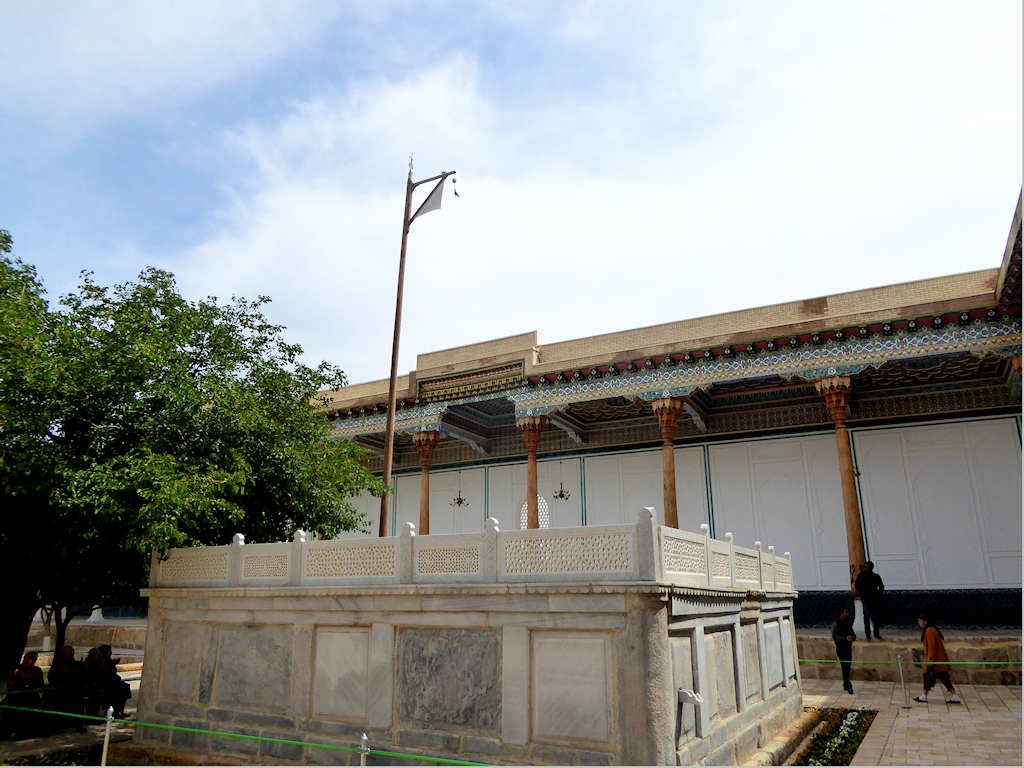 This was far more of a holy spot than tourist destination. The holy man’s aphorisms were displayed throughout the site: 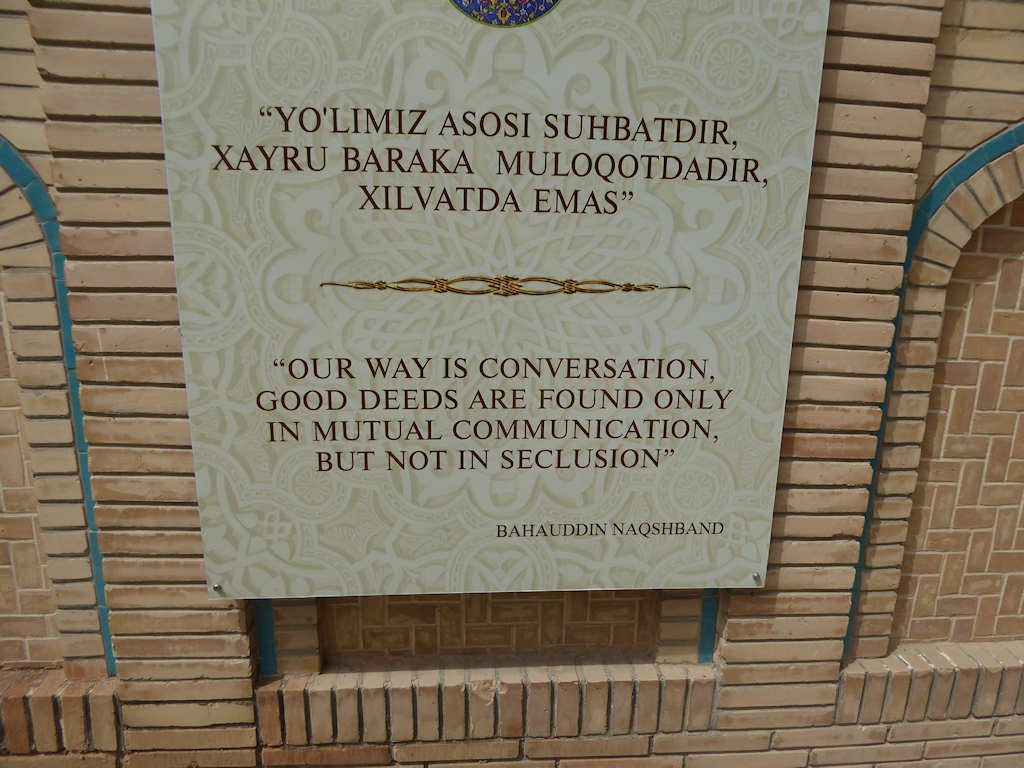 Next up was the summer palace of the last Emir. After seeing so much magnificent architecture, this palace seemed a little lightweight. In contrast to the previous site, the palace was packed with tourists. 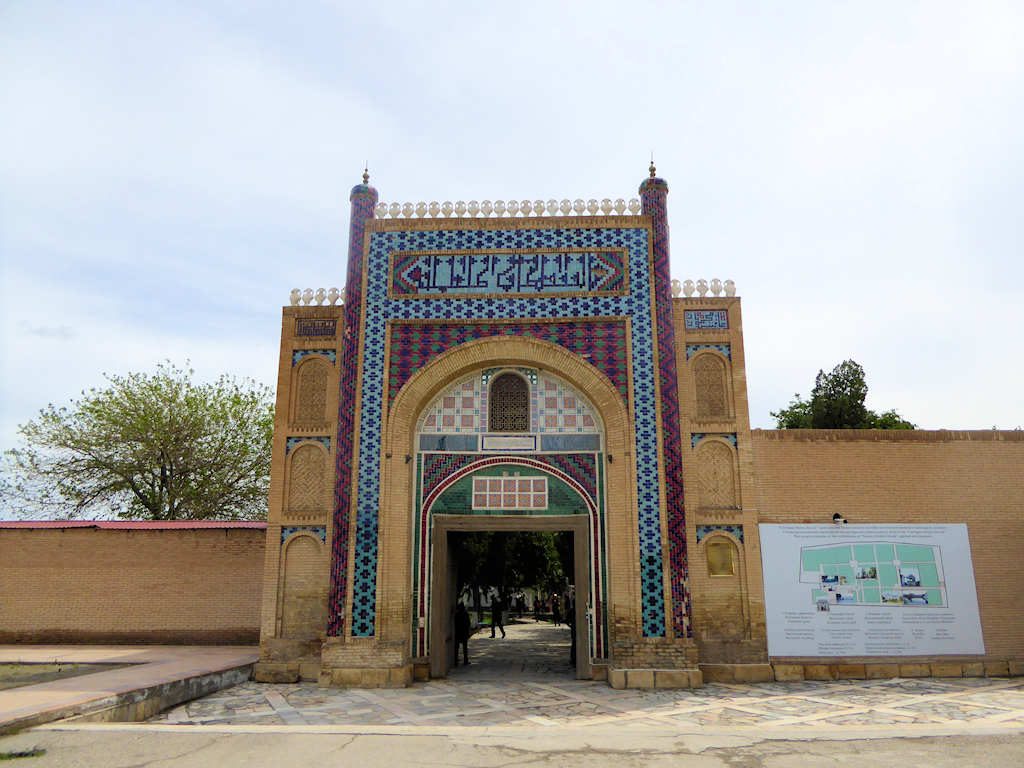 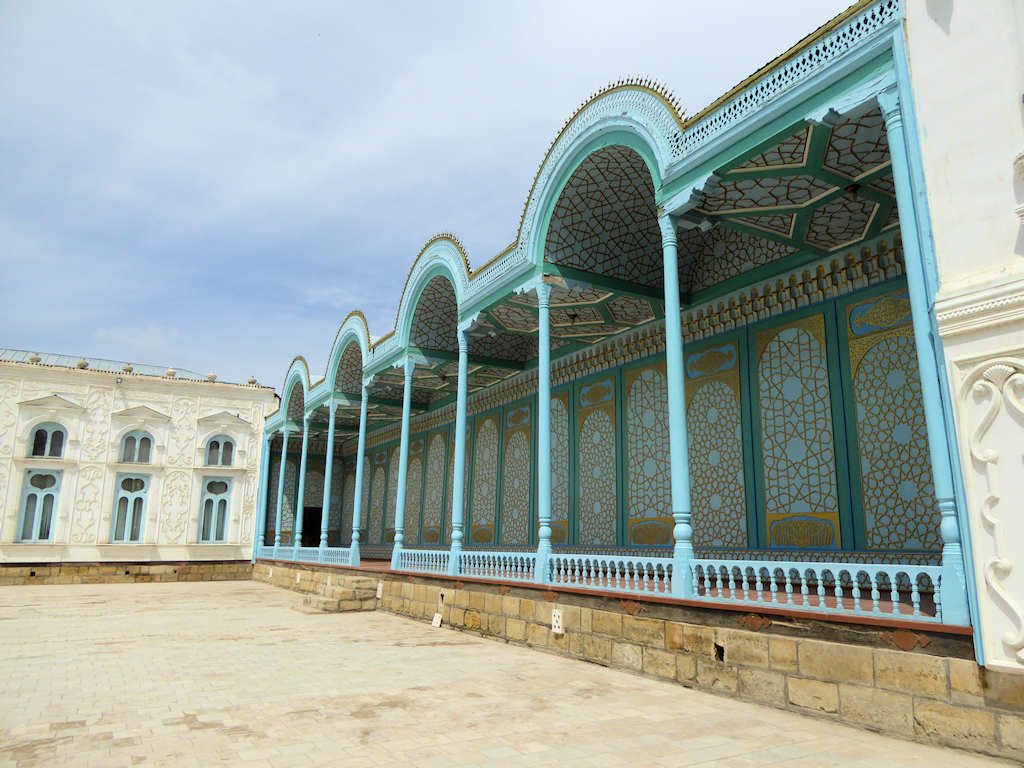 The interiors were as lavish as you would expect. 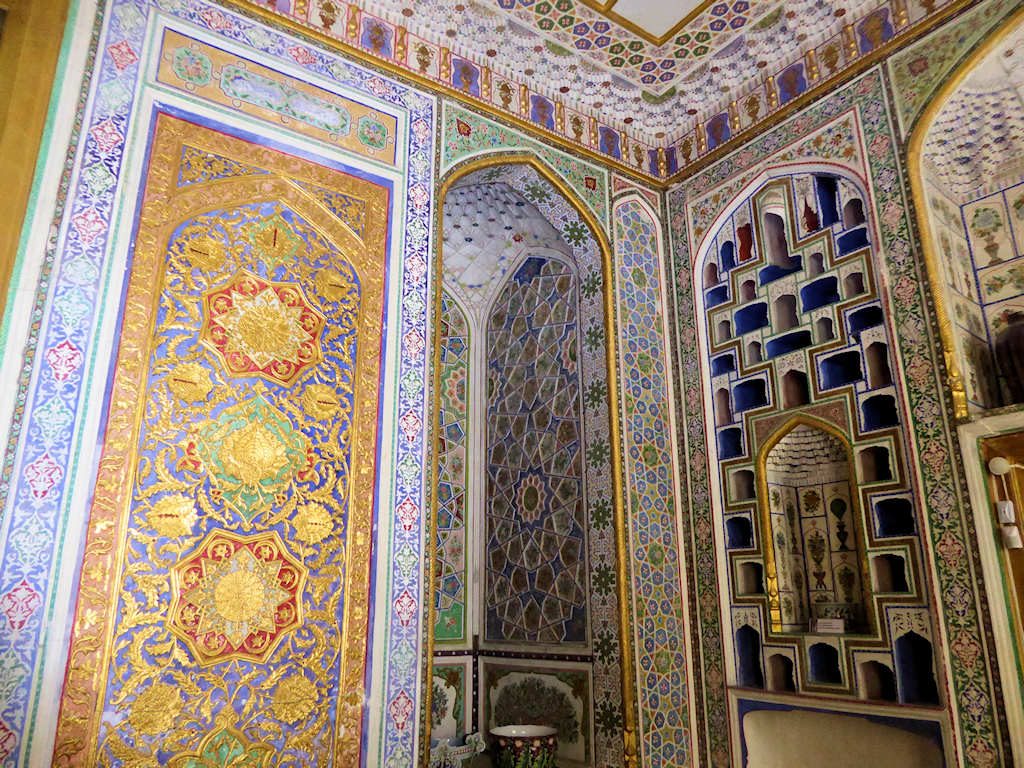 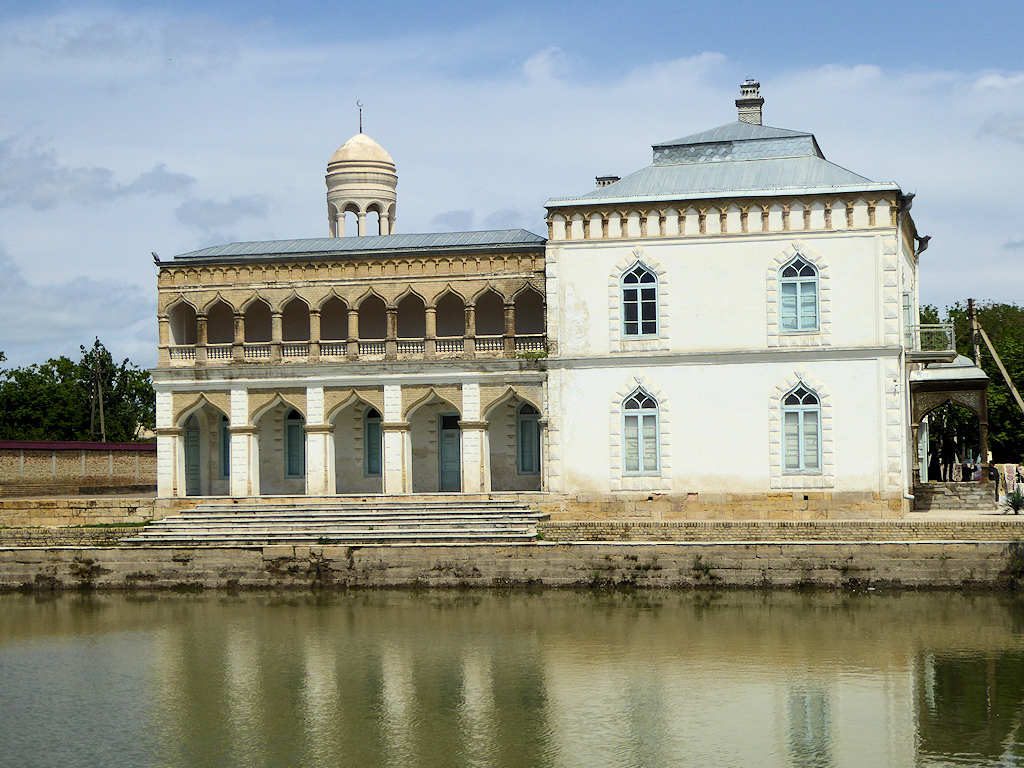 The harem palace (above) was so dark inside you couldn’t appreciate the tapestries. I liked the grounds more, especially the peacocks and screaming crows. 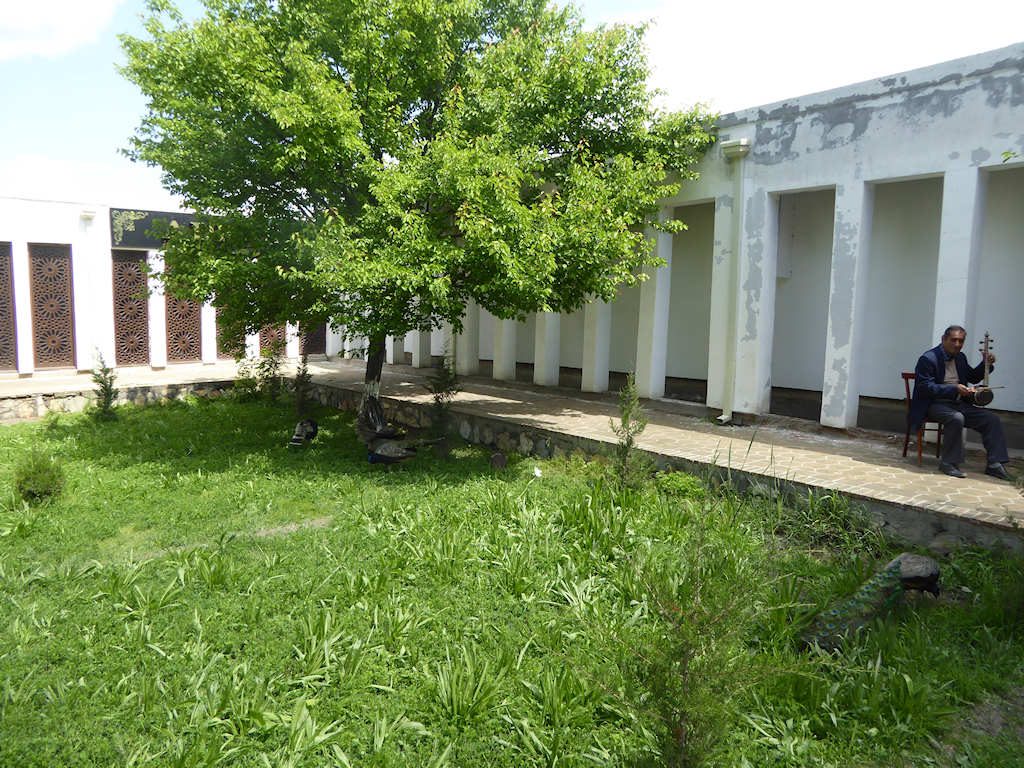 It was all way too touristy. I did see some earrings I liked in one of the many crafts stalls.

The last stop was the best. Char Bakr is a burial complex for several important sheiks. It was certainly not renovated much; you could only glimpse remnants of the ancient tiles. But it was largely empty and most evocative. It was still inhabited by the muezzin. His call to prayer was issued in a clear, strong voice. He also tended a flock of tame pigeons which you could hand feed. Geese, ducks and turkeys completed the menagerie. 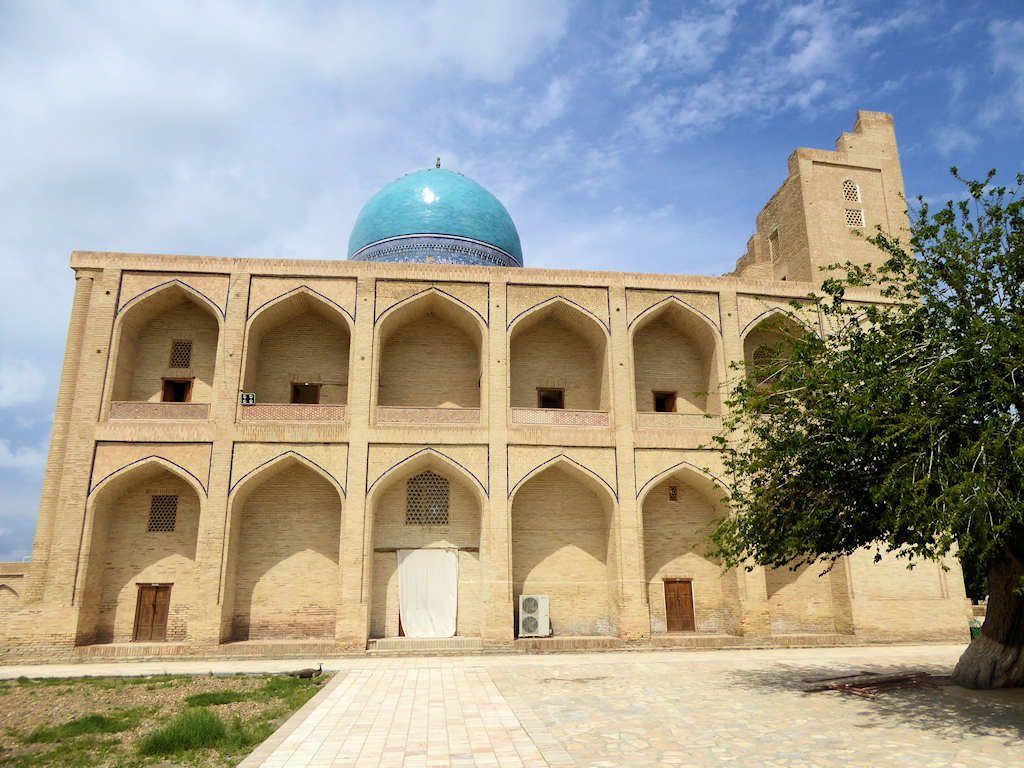 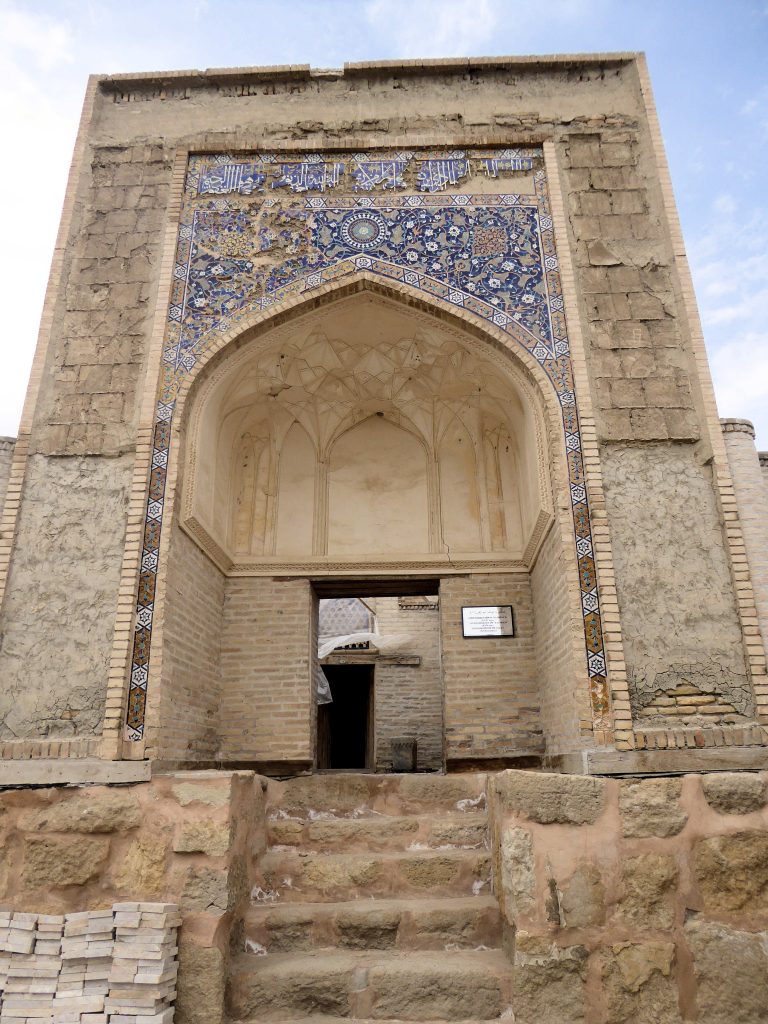 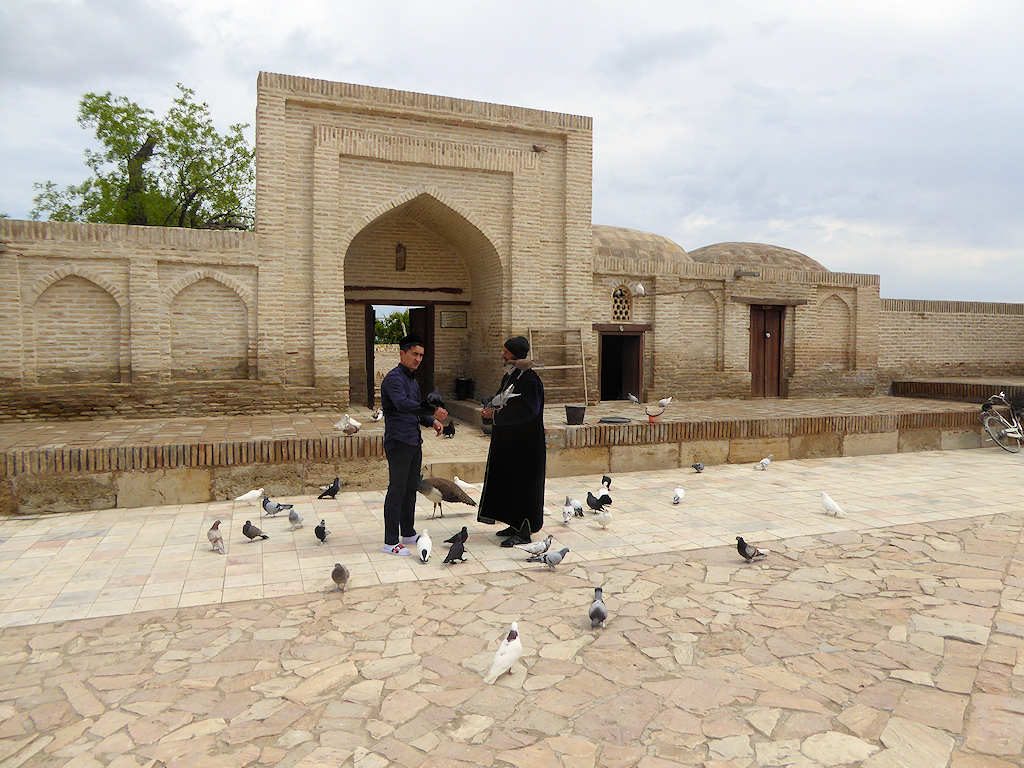 Back in Bukhara, I relaxed over a decent lunch at one of the restaurants around Lyabi-Hauz, the central square. 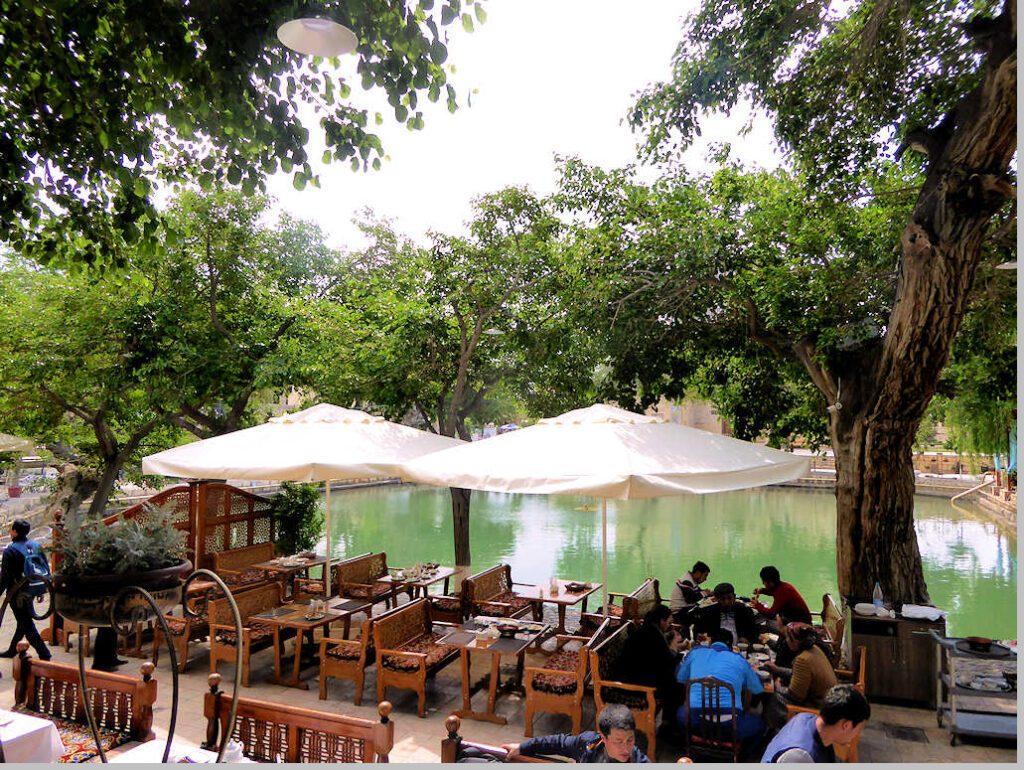 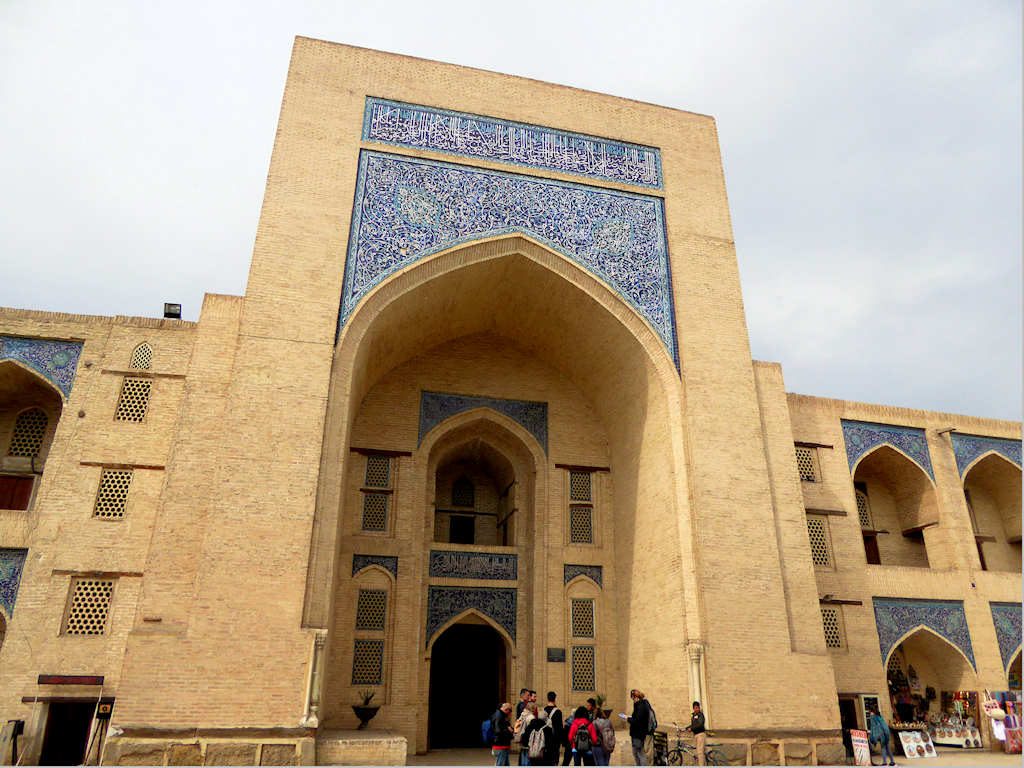 Then it was time for more sightseeing. I headed first to cute little Char Minar built in 1807. It’s postcard-pretty but slightly silly, no? 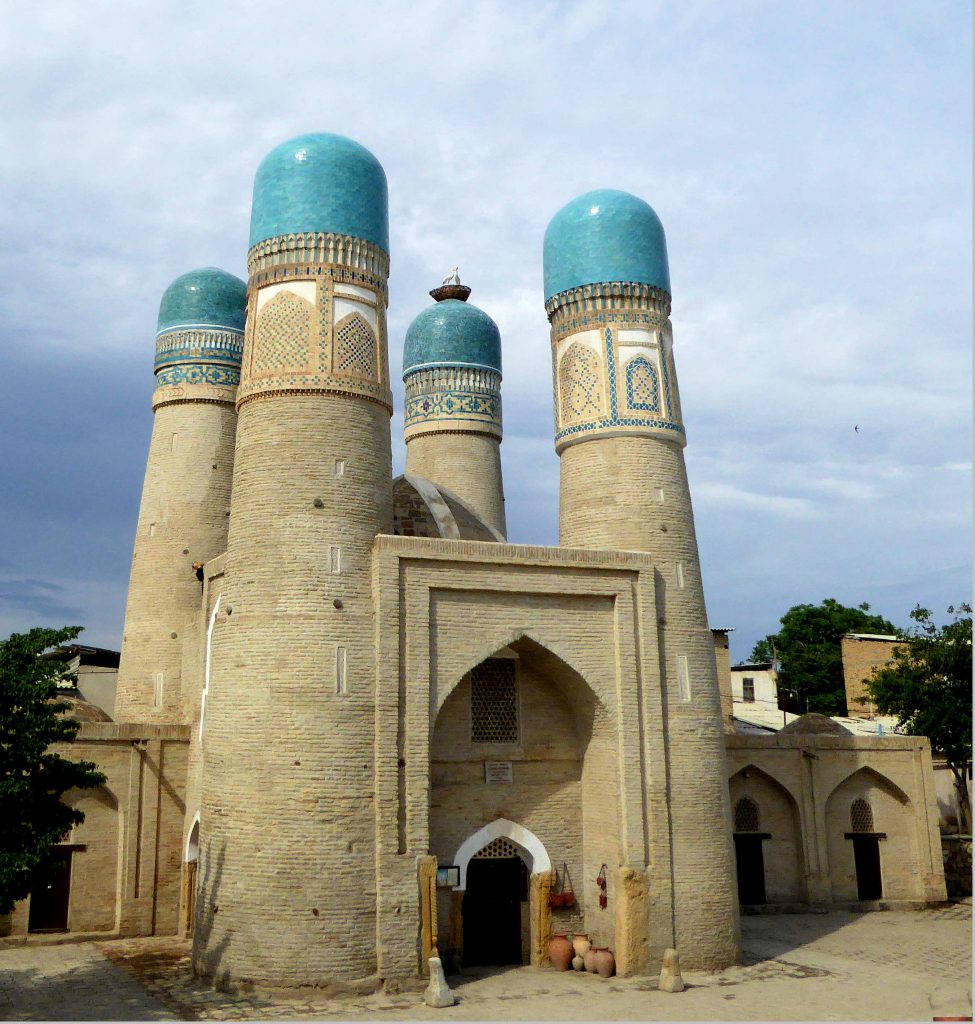 Then back through town and out to see the Ismail Samani Mausoleum. It was a long walk and I had trouble finding it. Finally I stumbled on the nearby Chashma Ayub mausoleum where a swarthy middle-aged man decided to give me a personal tour of the neighborhood. He spoke fluent French and English and said that he and his group of traditional musicians had even played the Salle Pleyel on Paris.

The Ismail Samani Mausoleum dates back to 905, making it the oldest monument in Bukhara. 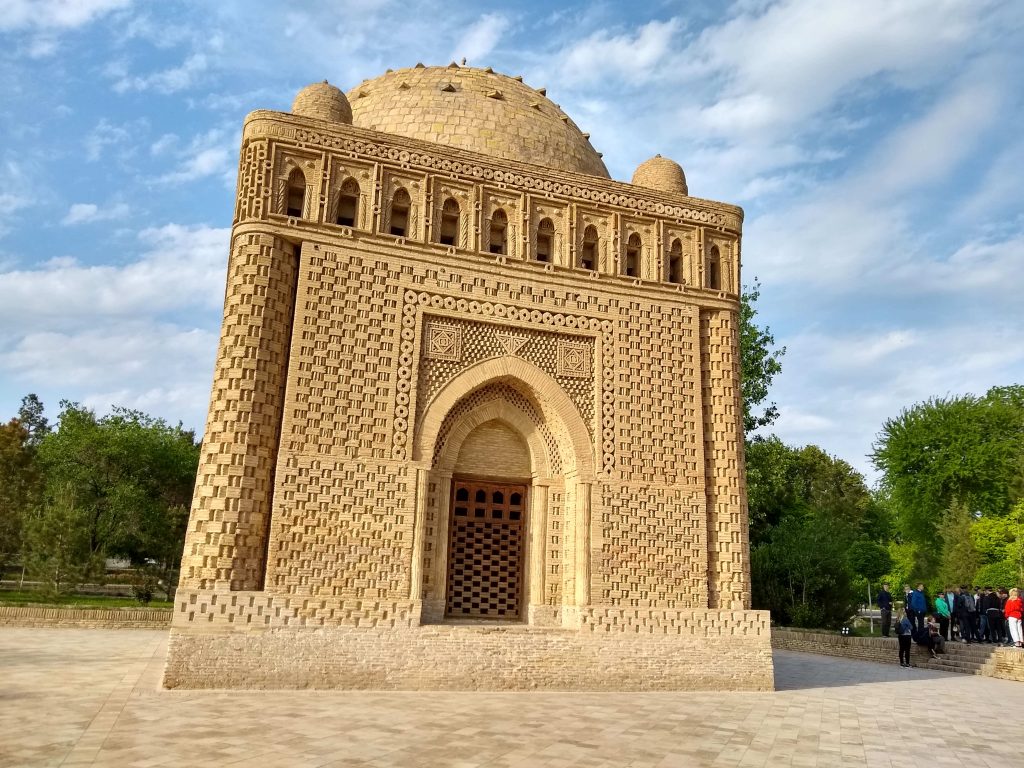 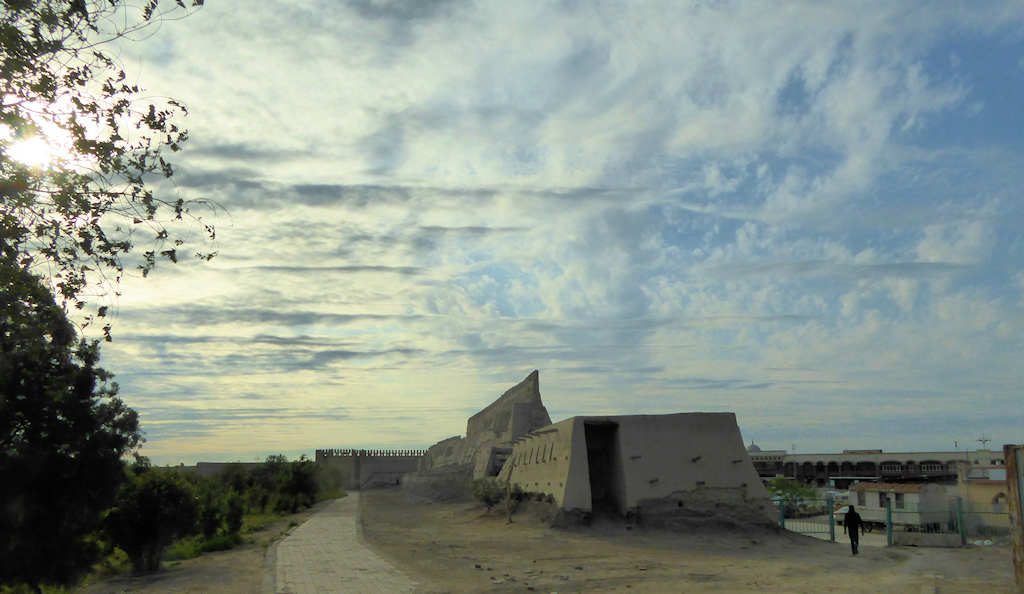 Above is a partially restored section of Bukhara’s ancient walls.

He was extremely knowledgeable and spent about an hour regaling me about Bukhara history. Then we headed back to the Chashma Ayub Mausoleum, now a museum dedicated to explaining Bukhara’s water supply. There’s a spring there which is where Job allegedly struck his staff. I don’t necessarily believe the legend but water from the spring was the sweetest and tastiest water I’ve ever sampled. Bottle that up and no one would ever drink soda again.

After all the time he spent with me I knew there would be an ask. He had CDs to sell! I bought one for about $6 out of respect for his time but also because I happen to like the music.

By this time I was exhausted and headed back to town, first on a bus to the Ark and then walking.

I headed right to Minzifa restaurant for some lovely vegetarian snacks and some wine. 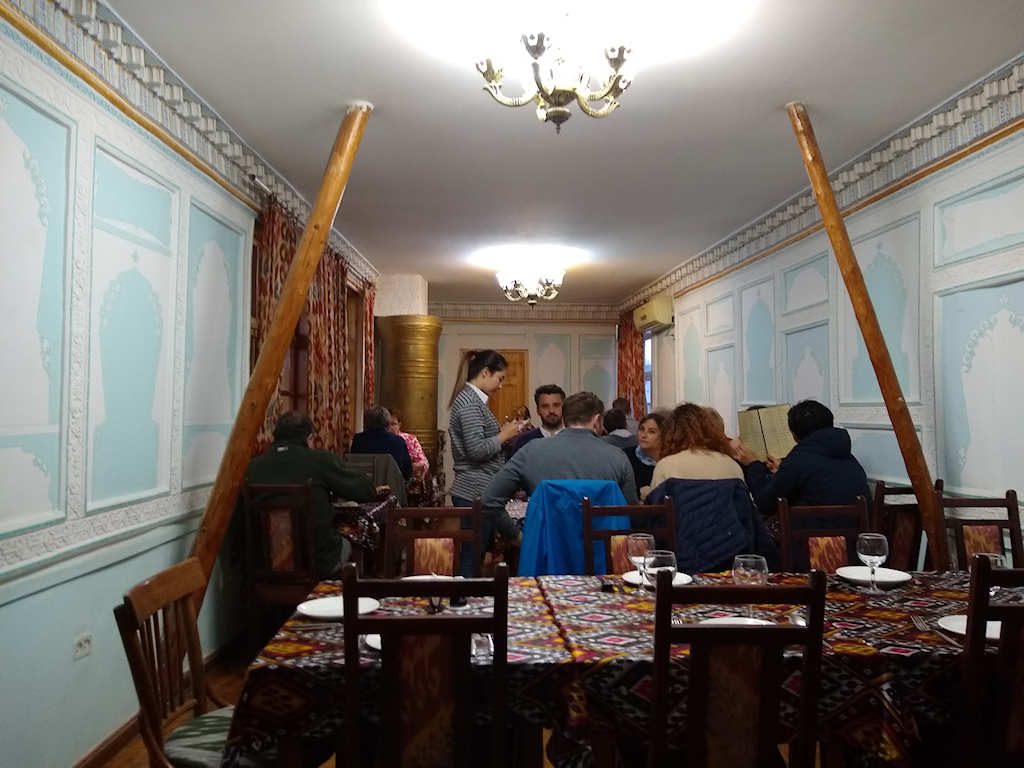 Uh oh. The bill came and the waitress presented me with a written bill for the food and then with a calculator, hurriedly tacked on about $8 for the two glasses of wine. French prices. I protested and she “gave me a discount” of a couple of bucks. What?? She sped away. I thought about it  it and realized that it was basically destined for her pocket. I put down the money for the food and a little extra for the wine and left. I knew she wouldn’t come running after me and she didn’t.

It was the first time in two weeks that anyone tried to pull a fast one on me. Too bad to end my Silk Road journey on a negative vibe.