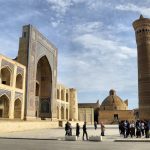 I awoke to a decidedly gray grim and chilly day. I checked the weather report for Khiva and it looked like it was even colder there and just as gray. Now it doesn’t seem like such a gigantic fail to have not worked Khiva into my itinerary. In fact for a gray and miserable day Bukhara is probably the best place in the country to be. There’s so much to see!

First stop was the 16th-century Synagogue which was right around the corner. 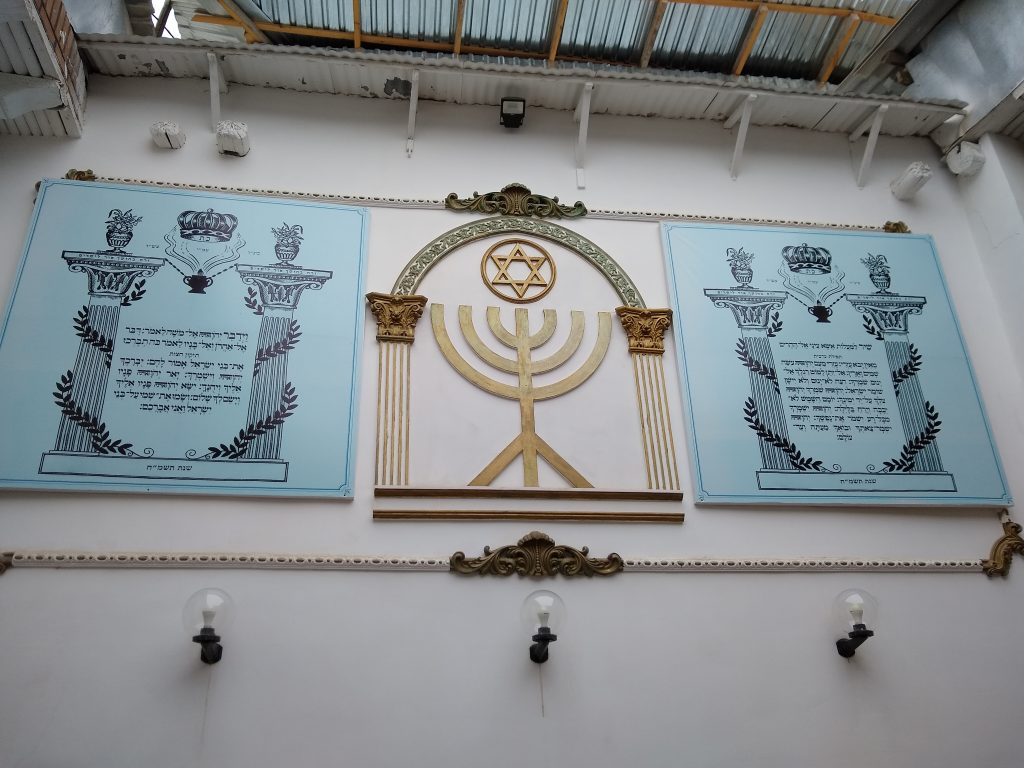 I was also fascinated by the ancient Caravanserai which once welcomed caravans. Now they host–what else–craft shops!

As the forecast indicated that it would clear up later on, I decided to spend the good part of the day again going over Bukhara’s endlessly fascinating crafts scene.

The problem that Bukhara has, and I think it’s shared by a lot of other countries with indigenous crafts, is that a lot of the styles don’t quite work in the west. I had thought of buying a small carpet but again the colors just didn’t seem to really go with my bedroom. A lot of the beautifully embroidered jackets and vests and light coats seemed to have colors that were maybe a little too garish to wear in France.

Gold embroidery is a major specialty of Bukhara but how many things with gold embroidery on it am I actually going to wear? So I got a small little pouch with a hand-embroidered design.

I want to support the local craftspeople but I also don’t want to wind up with something that is not really going to fit into my lifestyle. But I did get a beautiful scarf very subtle coloring made from silk and camel wool. .

Of course every time you stop and admire something you get a hard sell which is unfortunate. I also examined some jewelry and particularly some rings. I did appreciate the total honesty among the vendors who are happy to tell you if the stones came from Nepal or Afghanistan or if the shawls came from Pakistan.

The important thing to note about the bazaars is that the clothing is not just made for tourists. Local people buy and wear these styles.

I also checked out some of the other major sites and, despite the weather, appreciated the oldest mosque in Bukhara, now a carpet museum, Maghok-I-Attor. Dating back to the 9th century and then reconstructed in the 16th century, it is believed that Jews prayed here with the Muslims before the construction of the synagogue.

It was such a raw day, I lingered over a long cup of tea in charming tea shop.

Then I strolled back to this town center for some lunch at the Savoy restaurant which although very friendly again turned out to quite unimpressive.

And now finally in late afternoon the sun peeked out illuminating the gorgeous mosques and medressas that I had seen yesterday in the shade.

The 15th-century Ulugbek Medressa and 16th-century Abdul Aziz Khan Medressa make an imposing ensemble, facing each other across a massive square.

Even more spectacular was the Kalon mosque and Minaret and  Mir I Arab Medressa also grouped around a massive square.