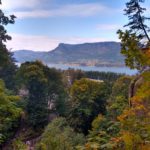 We pulled into downtown Portland around noon.Time for lunch! We had a decent meal at a downtown bar-restaurant and then looked around a little. Powell’s Books was a must–the world’s largest independent bookstore. Unfortunately my carry-on only plane ticket didn’t allow room for a major book shop but it was fun to look around.

Afterwards, we headed to a weed shop with a friend of Diane’s who needed to re-up his supply. It was so clean and wholesome; things have changed a great deal since I left the States!

The fall colors were in full bloom and I was impressed with the elaborate Halloween decorations.

And the spectacular fall colors: 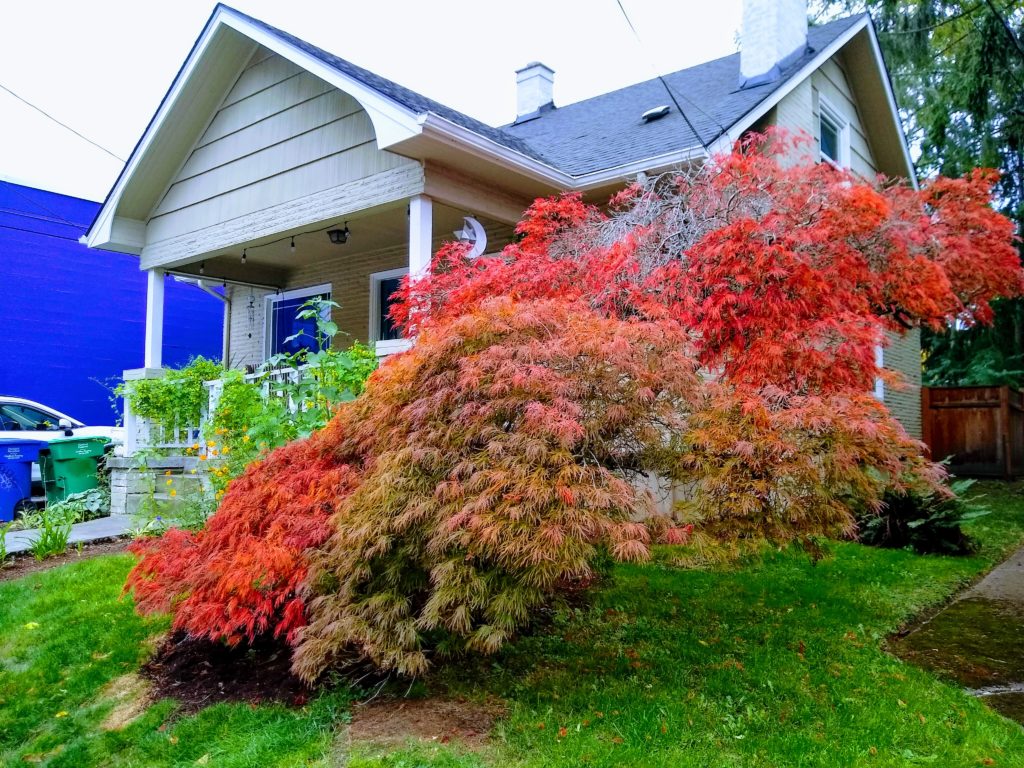 With the light fading, I headed to Hawthorne Boulevard for a look at the vintage shops, boutiques and cafes. I was particularly impressed with the New Seasons grocery store. As kale is basically unavailable in France, I had to buy a kale salad takeout which turned out to be delicious.

It took me awhile to figure out the bus system but eventually I caught the correct bus back to our AirBnB just as it was starting to rain.

The weather improved somewhat the following day which was great for our only full day of sightseeing. At least it wasn’t raining. Kathie’s friend, Jim, kindly took us up to the Japanese garden, a top sight in Portland. It was such a great time of year to visit as the foliage was in full autumn colors. It was busy though! 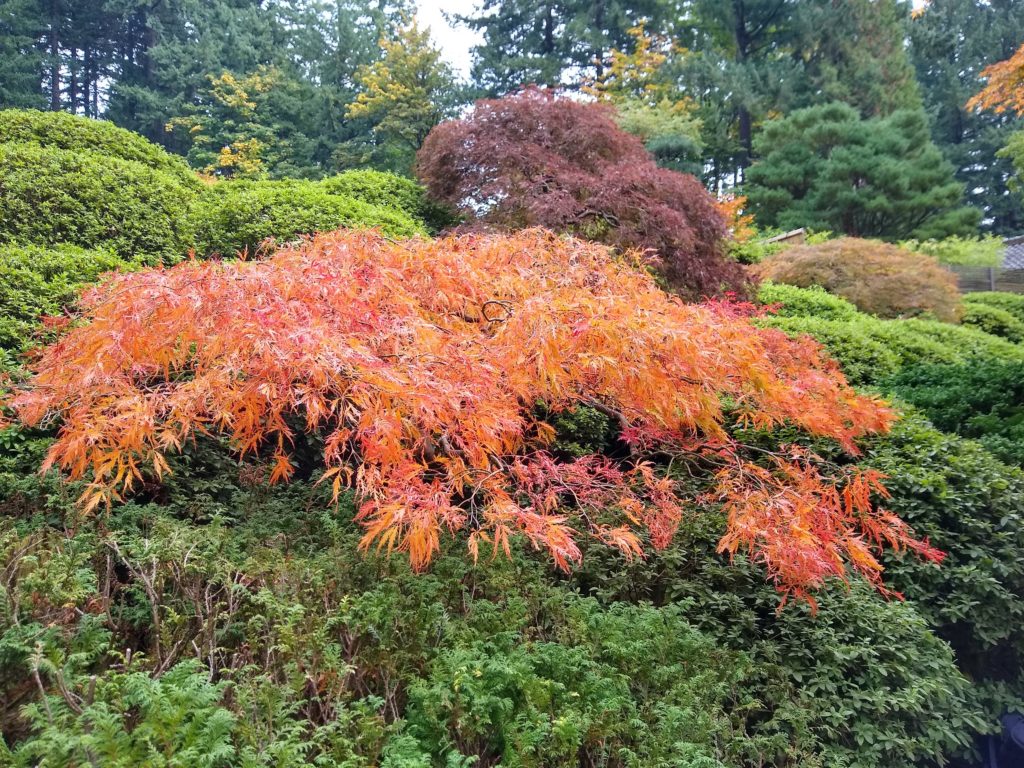 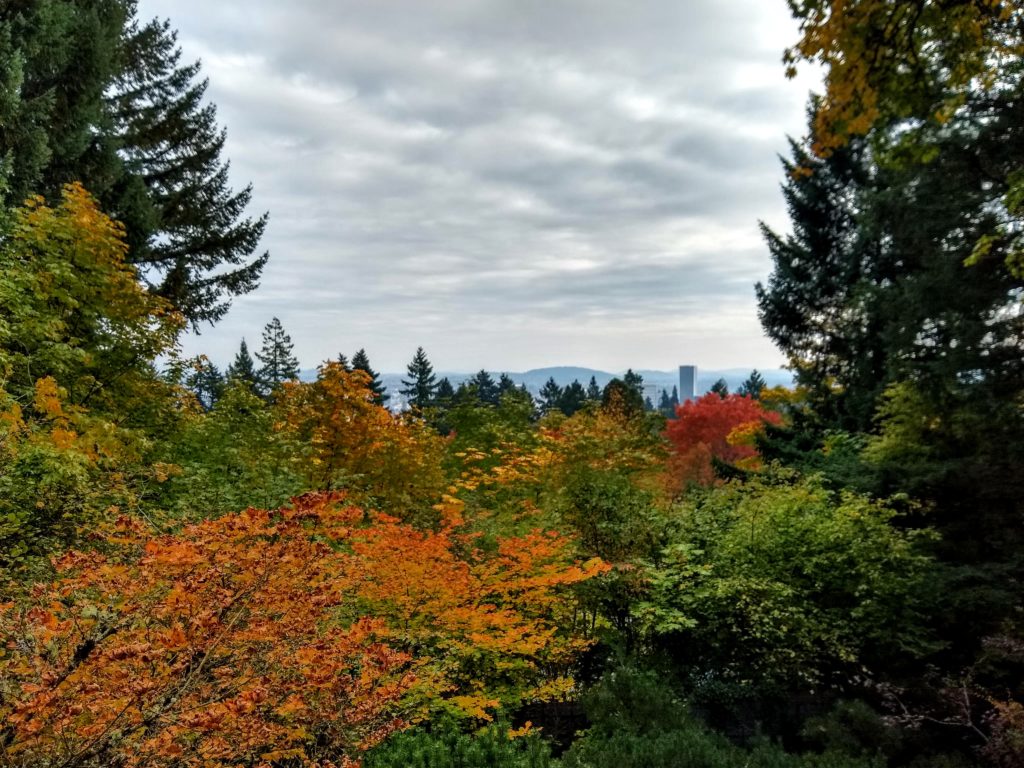 For lunch we headed back to Portland for the Saturday Market (also held on Sunday) which gave us a full dose Portland’s zany side. 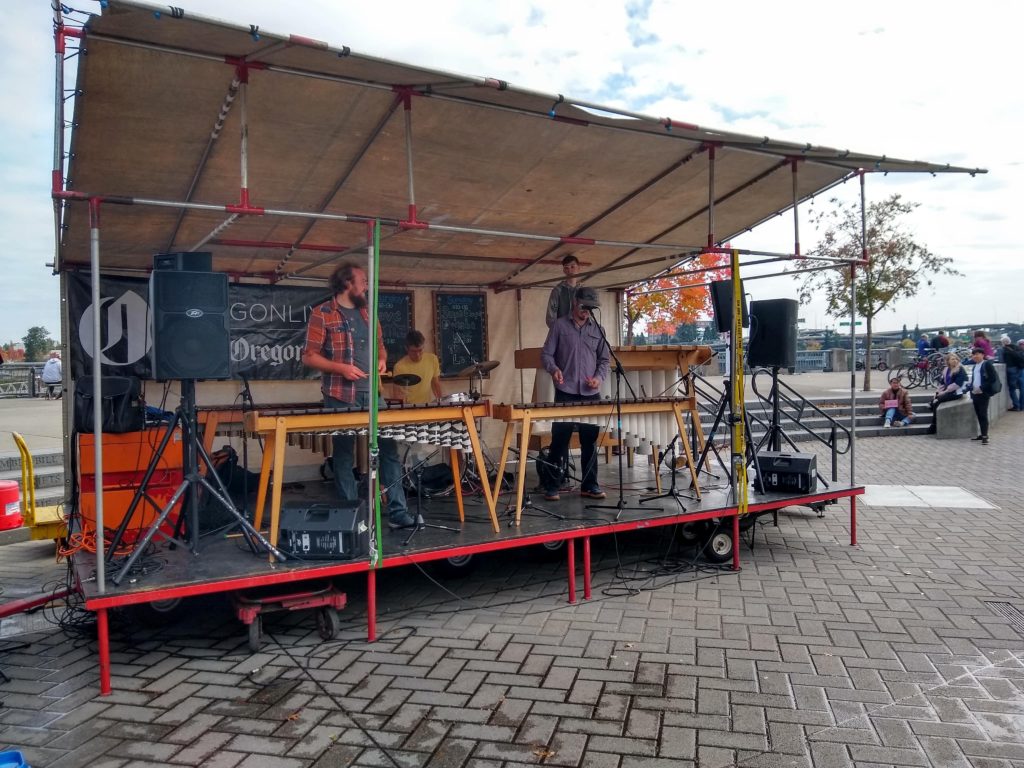 The band was good too!

After, we drove up to Multnomah Falls, the second highest falls in America. Only in getting out of town can you appreciate the beauty of the Pacific northwest.

Then there are the Wahkeena Falls:

And the Latourell Falls:

And, thank you Oregon for the great lookout point to take in the whole sweep of the Columbia River Gorge.

The whole day was exhilarating. We were hungry though. After much googling and calling, we realized that most Portland restaurants were closed on Sunday. We wound up going back to our luxe digs and ordering sushi which turned out to be excellent.

We spent most of the morning tidying up Kate’s fabulous apartment but it was such a beautiful day that Diane and I ducked out for a walk around the neighborhood.

Good to know which America we’re in.

Yes, whoever you are. Just stop it!