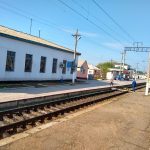 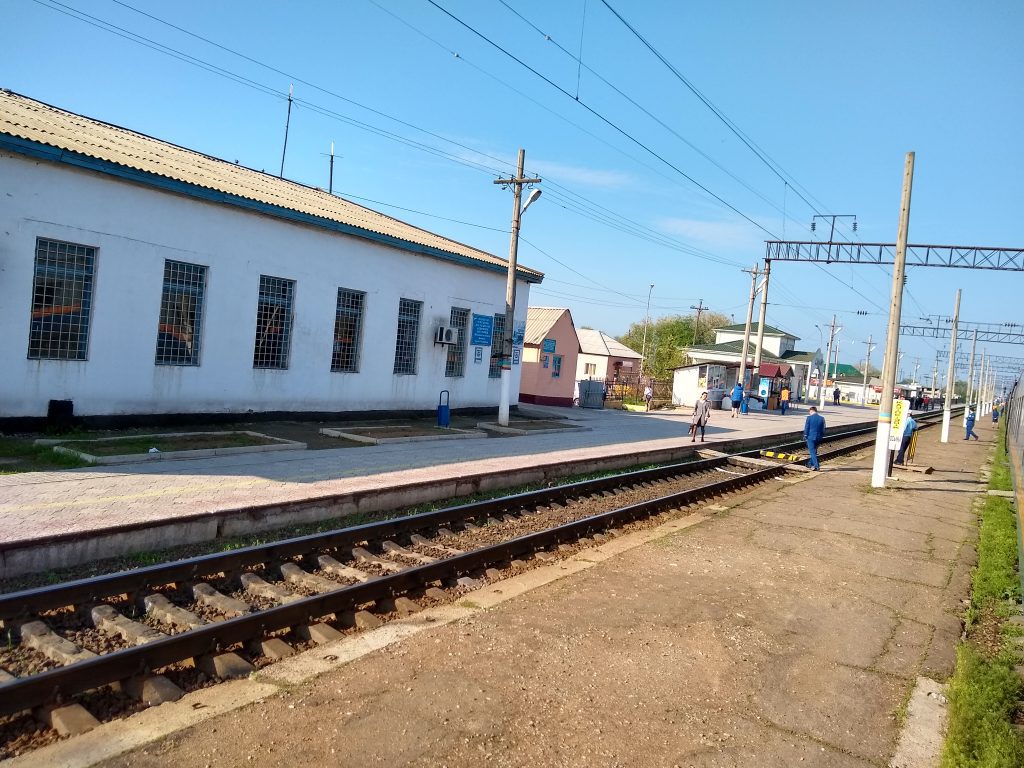 I slept poorly last  night as I was wired about the border crossing into Uzbekistan. One of the reasons why I chose the train rather than taking a bus or minibus across the border was I figured that the border officials would be more familiar with this newfangled e Visa program at a train crossing rather than in a minibus with a bunch of locals. Uzbeckistan only recently eliminated visa requirements for Europeans and allowed others, including Americans, to apply for a visa online. before that, a Letter of Invitation was required.

I had heard stories of long delays at the border, customs officials going through your bags to look for forbidden medication and crucially important customs declarations. I can’t remember the last time in my long travel history that I was uptight about a border crossing.

Unfortunately the train left shortly before 7 a.m. which meant that I boarded the train quite exhausted and with the beginnings of a head cold.

About three and a half hours later the train stopped and the officials boarded the train. Obviously there are no pictures of this experience.

The head immigration officer was a beefy fellow who sat down in the seat and pulled out a device that seem to be a custom laptop with a forward-facing camera. I have never seen anything quite like it. I produced my passport and my e-visa which he scowled at for quite some time as I became increasingly nervous. He was going to stamp my passport, had the stamp right on the passport but then stopped and gazed again into his screen. I waited and waited and finally I got the stamp. I return to my seat and thought all was over. But no. He left the car and about 10 minutes later came back. He motioned to a young Korean guy to translate and asked to see my e-visa again and then asked through the Korean translator who spoke excellent English if he could see my papers again. Is this a letter of Invitation he asked. No I said it’s an e-visa which I got online. Finally he scowled and walked away.

But the ordeal was not over. There was still customs to deal with.  Once he immigration authorities left we rolled on the few hundred meters and then the customs people boarded with more questions. They were  friendly enough even though they asked to open my bag and then asked where I was from. I said I was from New York which seemed simpler and always gets a really good reaction. Then they asked how tall the Statue of Liberty was. Since everyone was being so friendly I tried to be about as charming and delightful as I could muster up in my diminished state. I laughed uproariously and said I didn’t know.

Then the big guns came on. A very attractive thirty-something guy boarded, all dimples and smiles, and set himself across from me  all ready to shoot the breeze. Why was I traveling alone?  I said I was widowed and my kids were grown. He couldn’t have been more charming and even just ever-so-slightly flirtatious. We laughed and chatted about New York, about where I was going in Uzbekistan, about how much time I plan to spend in Uzbekistan all interspersed with him expressing a desire to of course go to New York. Then he wanted to know what I thought of Trump.  I replied honestly that we really hate him but then he said “oh but Ivanka Trump is very beautiful.” Yes I agreed quite beautiful and greedy. Then he wanted to know if I had brought anything illegal in my suitcase because America is known for  drugs and guns. “Oh no!” I said that I hate guns and drugs, would never have them and went on and on and babbled about that for a while. He spoke excellent English and was so pleasant but eventually I realized that actually I was being interrogated. How much money did I bring with me? Was the Freedom Monument in New York?   Etc, etc. As attractive as he was, I found myself silently begging please please go and leave me alone. Please go. Finally he and the other three or four guys who were hanging around left and the train stood there for a while.  The whole process took a good two hours.

The Korean guy was friendly and talkative. Actually he was of Korean an ethnicity but born and raised in Tashkent. Stalin had expelled several hundred thousand Koreans in the 1930s and most wound up in Kazakhstan and Uzbeckistan.  He had worked for a while in Shanghai but had to leave because the air pollution was so bad that his baby daughter’s life was in danger. He was traveling with his wife but for some reason appeared in my car. I was getting so paranoid at this point, I fleetingly wondered if he was somehow working with the police.

I had arranged for the hotel to send a taxi even though I knew that it was going to be overpriced because it seemed simplest.  I was exhausted and ravenous at this point. I thought the trip would be five hours but it was actually six because Tashkent is an hour behind Almaty. Illogical but true.

The taxi driver spoke English fairly well and told me that he had applied for the Green card lottery system and was waiting for an answer. He hoped to do his dissertation in macroeconomics in a university in America and wanted to know if I thought that it would be possible. I told him I’d absolutely no idea but that he should consult the university’s website and contact them directly.

So finally we arrived at the Empire hotel which, to be honest, is completely unprepossessing and rather overpriced for what it is but the manager was absolutely adorable and advanced me money to pay the driver and get food. Of course there was no currency exchange open because you can only exchange currency at the bank and it was Sunday. Anyway he really couldn’t have been nicer and ordered some food and I proceeded to rest up for the rest of the day.

Later on, I met the hotel’s other american guest, Nick, who was working on a doctorate in Turkic languages. He was delightful company and filled me in on life in Tashkent, such as the fact that there is no town center. He also walked me over to an ATM two kilometres away that fortunately coughed up some cash.