I worried that five nights in Cappodochia might be a little too much time in Goreme, Cappodochia but I had no choice given the flight schedules. It turned out to be the best decision of the trip! I can see why some people fly in and decide never to fly out for it is truly one of the earth’s most astonishing landscapes. Here is the sight that greeted me when I opened the door to my “cave” in Sunset Cave Hotel: 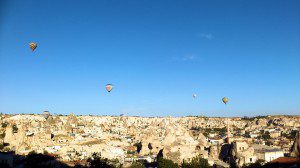 Neither words nor pictures can do justice to seeing those colorful balloons rise over the silent landscape of misshapen volcanic rock but, trust me, it’s magical. There’s no place like it.

My day’s goal was visiting the Open Air Museum of Goreme but mostly I just gaped, awestruck by the strange rocks like this 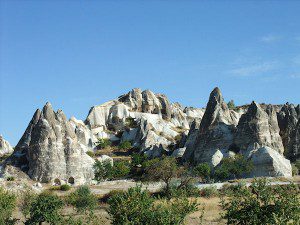 Next was the Goreme Open Air Museum a (hot) mile walk from town but a must see for the churches cut into the volcanic rock and adorned with 12th and 13th-century frescoes. It’s part of a vast monastic complex. 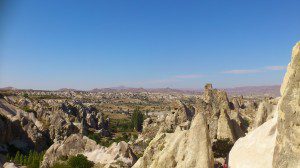 The following day I signed up for the “Green Line” tour wih about 10 other people and our darling young guide, Estra, who, by the way, was the first female guide I’d seen outside Istanbul.

Our first stop was the Derinkuyu Underground City. The city stretched down 18 levels although we only visited the first six by making our way through narrow passages and cramped tunnels. One of 200 underground cities in the region, this one could shelter 20,000 people plus their livestock. It was first built by the Phrygians in the 8th to 7th centuries BC and later used by the Christians. 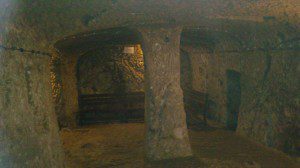 Next up was a short hike through the lush Ihlara Valley followed by lunch at Belisirma right on the river. I chose the river trout and suspect it was the cause of a week’s worth of tummy trouble. 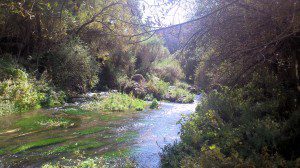 After lunch, it was back to the rocks! Give a monk a chisel and see what happens. It’s the Selime Monastery, a huge monastery complex carved into the rocks. There were so many strange nooks and crannies, it’s easy to understand why the complex was approached to be the site of the first Star Wars flick (permission denied) 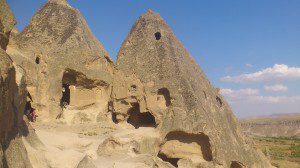 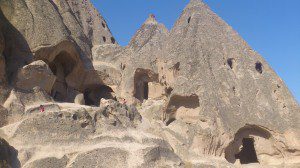 The glorious day finished with a peek at Pigeon Valley, so-called because early folk built dovecotes there to maintain the pigeons that were vital for communication. 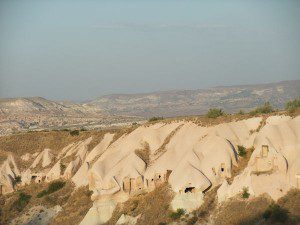