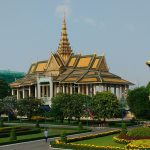 Today was breezy as well but I still decided to take a tuk-tuk to the Genocide Museum or Toul Sleng. The ride there took me through a different port of Phnom Penh, more modern and with wide boulevards.

Toul Sleng or Camp S 21 served as a torture and interrogation Center for the Khmer Rouge. Some 20,000 people passed through there before being executed in the Killing Fields outside of town. 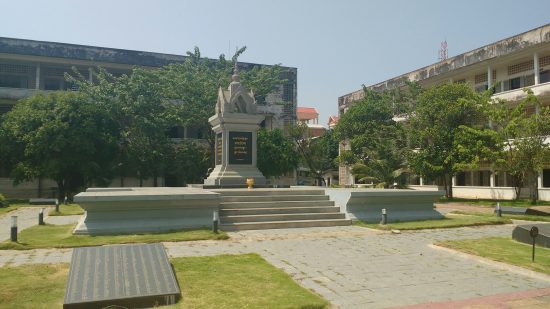 After being arrested by the Khmer Rouge the detainees were taken to this former high school now a detention center where they were photographed, thrown into cells, chained, interrogated and tortured, sometimes to death.

It was gruesome. The audio guide was excellent and explained the purpose of each room and how the Detention Center operated. It also gave background on the people involved in running the Khmer Rouge and this particular detention center of which there were dozens in the country perhaps hundreds. The audio guide also allowed you to hear the stories of actual survivors of which there were few.

Although the audio guide warned listeners at various points that the testimony and the visuals were going to be difficult, I somehow hadn’t realized exactly how difficult it would be. Sometime near the end of the visit when it got to the particulars of the torture implements and techniques and pictures of emaciated corpses I really couldn’t take it anymore.

Fortunately the grounds was a peaceful place to continue listening to the narration. 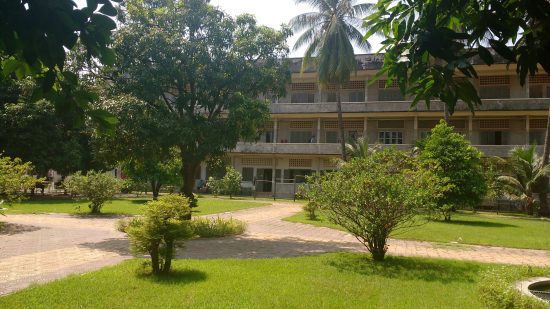 The image that stayed with me the most was of prisoner 261. There were several hundred “mugshots” of prisoners taken as they arrived in the Detention Center. I found myself wondering what they must have been thinking as these photographs were taken. Some seemed almost defiant, some looked as though they thought they were going to get through this, some seemed resigned.

Prisoner 261 had longish hair, almost sensual. I wondered if he was a hairdresser, an artist or a musician. Anyway he was looking off to the side, unlike the others, and his mouth was open as though in shock. His eyes were terrified. He knew, he unquestionably knew that he was entering the gates of hell.

I found a few more photographs like that. The people that seemed a little odd as though they might be misfits seem to have the clearest idea of what they were in for.

It it is impossible to understand modern-day Cambodia however without understanding these events. I left nauseous and with a throbbing headache and went bouncing back to town in a tuk tuk.

I decided to invest in a pedicure which calmed me down a bit at least enough to have a nice noodle soup for lunch.

After lunch I visited the Royal Palace which sprawls over enormous acreage in the center of town on the riverfront. 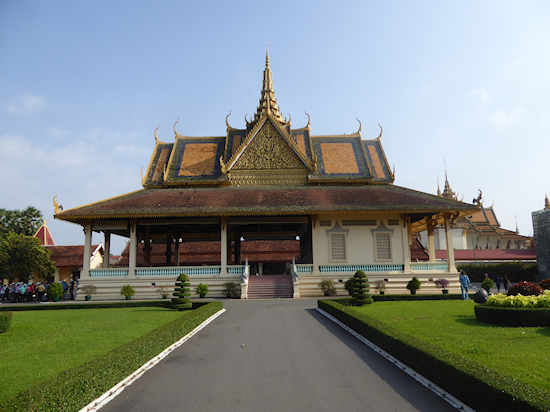 The palace was designed by French architects as it was under French colonial rule at the beginning of the 20th century. Although the basic structure was Khmer, there was so much gilt it reminded me of Versailles.It was where Louis XIV would live if he were Khmer. 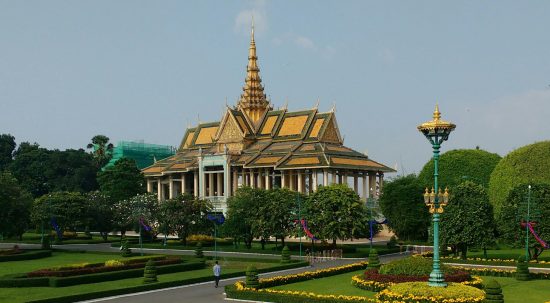 At any rate it seemed emotionally and spiritually empty.The best part was the murals. 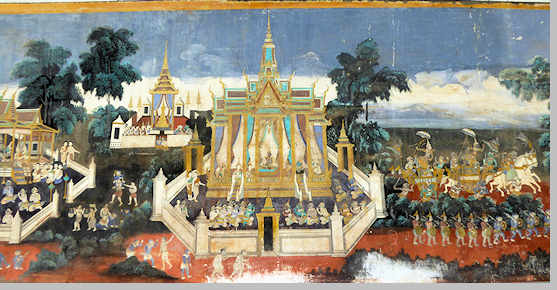 It also annoyed me that there were no explanations in either English or Cambodian of any of the exhibits or rooms. You’re supposed to buy the services of a guide for $10. I wonder how Cambodians are supposed to be able to afford this. They should have a right a right to see and understand their own Palace. God knows they paid for it.

Tonight I went to the night market and did a little shopping followed by a wonderful dinner at Bophus restaurant, a sprawling colonial style place right on the river. With such a perfect location and its upscale look, I was sure the food would be mediocre. Wrong!

I began with papaya salad which was exquisite and followed up with the best stir-fried vegetables I’ve ever had in my life.

There’s some kind of strange unnamable spice that I love and I must find out what it is.

I finished the evening with a final stroll along the river. I shall miss Phnom Penh.