It poured rain in buckets last night and the streets were still wet today. The skies were grey and overcast with a dubious forecast so I decided to pack up and leave. Janna, my Danish neighbor raved about the beauties of Champasak.”So nice”, she kept saying. Why not check it out?

Things started off well. The boat ride along the Mekong was gorgeous and lasted for a good half-hour which gave us time to appreciate the lush greenery of the 4000 or so islands and islets. 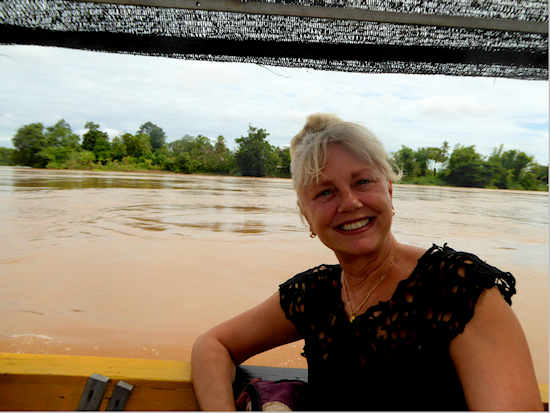 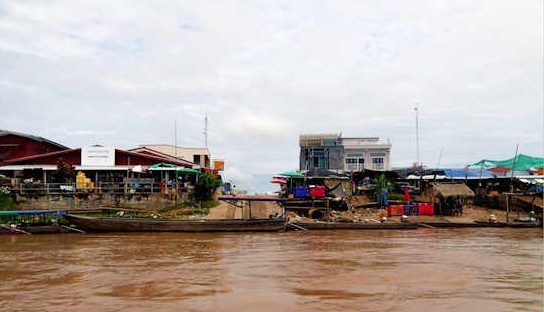 When we got to Nakasong, a ramshackle village on the river, there was some confusion and negotiation about the minivans. We waited for it all to be sorted out and I was placed into one minivan that already had some people in it while the rest of the small group was placed in another.

We traveled along for about an hour and a half and then the minivan stopped on the main road. The driver pointed to me and told me to get out. He took out my luggage and that was it. I said where is the boat? He pointed to a road that stretched into the distance and said it’s at the end of that road. I said how long is it? He said about one kilometer. I started trudging along and after about a hundred meters realized that this was going to be a bit more than one kilometer because the road was stretching as far as I could see.

Uh-oh. There were no tuk-tuks in sight and I didn’t see how I and my luggage would fit onto one of the few motorcycles parked here and there.

A SUV cruised up behind me and I flagged it down. I said where is the boat to Champasak? He pointed in the complete other direction. Just then another minivan stopped and said no that it was at the end of the road. I said about how many kilometers. He said about 4. I said well you’re going to take me there. He said no I’m full. I said well I’m not going to walk 4 kilometers so you’ll have to take me. So he agreed and I jumped in and saw that it was the other small group that had left with me this morning. Clearly they had oversold the minivan trip and stuck me on some local minivan. Boy was I angry. I’m taking it up with my hotel there and of course TripAdvisor.

We hopped on yet another small boat which took us across the river to a muddy embankment. Fortunately someone showed up and I told him that I was going to the Nakorn Guesthouse. He called them and then offered to take me on his motorcycle Then just up the road we saw that there was a tuk-tuk which did take me to the guest house.

The Nakorn Cafe and Guesthouse

Although this guesthouse offered a transfer they did not get my arrival info because the internet was out.

The Nakorn Guesthouse is quite an estate, with gardens and terraces, a restaurant- cafe and beautifully outfitted rooms. 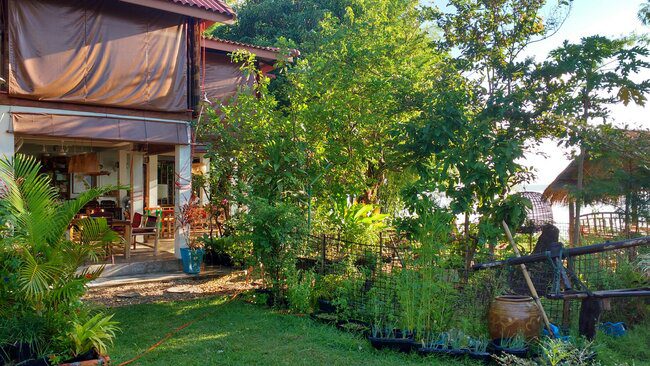 As in other places, the quality of wood in the rooms is just outstanding. It’s all hardwood on the walls and floors, clearly cut from local trees. I know that Cambodia is famous for the quality of it’s wood and I suppose Laos is the same. Basically they are cutting down their forests to make gorgeous wood for guest houses.

My room faced a temple. 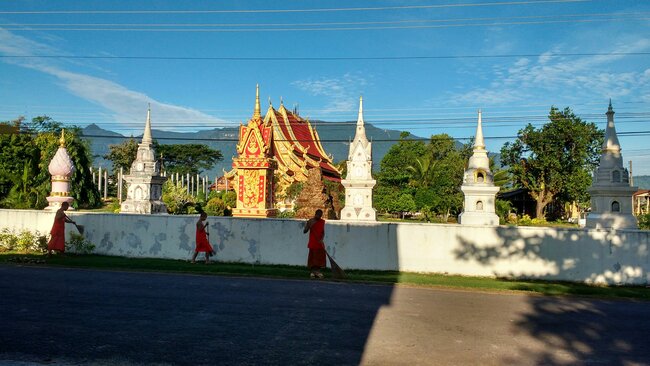 After an excellent lunch of Thai chicken with cashews, I took a rest and set out to explore the town. The bike was a little bit better than the one in Don Khone but not by much. It’s still quite tiring to ride as the bike is heavy, has no gears and is exceedingly uncomfortable. I wondered why this guest house which invested so much money in elaborate rooms and careful landscaping could not invest in some better bikes.

It’s an example of a rather strange lack of business sense. For example, in Don Krone they were selling a pile of those exceedingly practical conical straw hats that are typical of Southeast Asia. The problem is that they had no chin strap to attach them to your head. So they were completely unusable.

In the little of that I saw of Champasak, I could see why Janna and whoever wrote the Guide Routard fell in love with a place. The road is paved and lined with a variety of houses from crumbling Colonial mansions to more typical Laotian structures on stilts. There were local shops selling a variety of household items, glittering temples, a few shops catering to tourists, and food sellers grilling chicken or meat by the side of the road.

And of course the majestic Mekong River glimpsed just beyond the buildings and thick tropical foliage. 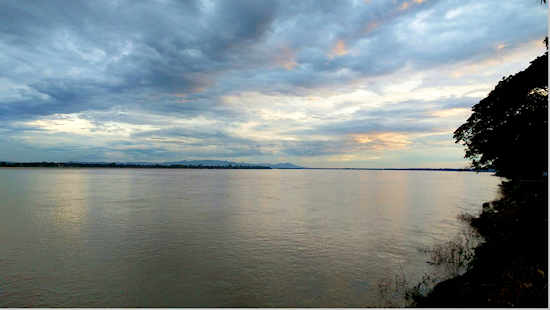 There was also a very obviously upscale shop selling silk and woven goods from all over Laos. It was run by a French woman who I discovered had relatives on the French Riviera. I didn’t get the impression that she really needed to make a lot of money from her rather expensive scarves and stuff. In another odd business choice, all of her fabric was neatly folded but you couldn’t really tell what it was from looking at it. Scarves? Shawls?Tablecloths? You had to unfold something to find out what it was. Odd.

Anyway, I’m looking forward to exploring the temple tomorrow and perhaps taking a long walk or bike ride. I hope the weather holds out. I also hope that the Wi-Fi connection is reestablished. Apparently the signal was lost after the storm last night.