↓
Home→Laos→Luang Prabang: Of Monks and Caves 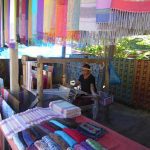 The day started at 5 a.m. which of course is not my preferred time to start anything. But the procession of the monks is one of the highlights of Luang Prabang and the monks start it early.

It was dark and quiet as I made my way to the night market which was of course closed but that’s where the monks make their procession. It’s a tradition here and elsewhere that bumps leave the temple at dawn and local worshippers give them alms, mainly sticky rice.

The only people out that early were people who sold sticky rice that you could give to the monks as well as a few other treats. Little plastic stools were placed along the route so worshipers could sit down and wait for the monks to come along.

It was nice being out on the cool, dark, quiet streets. Soon  the streets begin to fill up, mostly with tourists. Unfortunately the procession although a local tradition has become kind of a tourist spectacle.

I noticed outside of a number of temples there were signs posted asking people to please respect the tradition and to not make noise and should not use flash. It is permitted to give something to the monks but only if it is “meaningful”. I decided that since I wasn’t Buddhist it wasn’t meaningful to me so I did not pick up any sticky rice.

It has to be said that as the streets gradually filled up waiting for the monks, tourists outnumbered locals by about 4 to 1. It kind of makes sense because not too many locals live in the historic centre anymore so I wouldn’t expect that they would be out in force. So it about 6 the monks in their orange robes began filing out and those who had things to offer them gave a slight bow and put their sticky rice or whatever in the baskets that the monks were carrying. It was all very solemn. I was impressed with have the monks managed to stay focused, walked quickly and were not distracted by all of the cameras going off. There were maybe about 100 of them  and the procession lasted for a while. The monks ranged in age the youngest seem to be maybe 9 or 10. There weren’t so many old ones. When I got up close it seemed to me that some were, how to put it politely, perhaps not the brightest bulbs. After passing out of view of the alms-givers, the monks threw away the sticky rice. 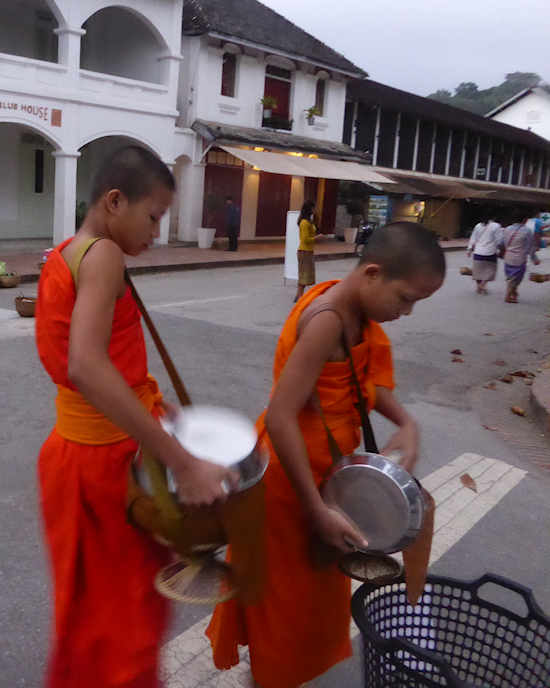 By about 6:30 it was all over and most had already returned to the temple. It was nice but I preferred the one in Champasak because it was so unexpected.

Then I headed back to the hotel to get a bowl of noodle soup at the wonderful noodle shop down the street and begin my excursion of the day. This excursion was to the Pak Ou caves.

We boarded the boat at about 9 and headed up stream in a very beautiful ride to the famous caves. 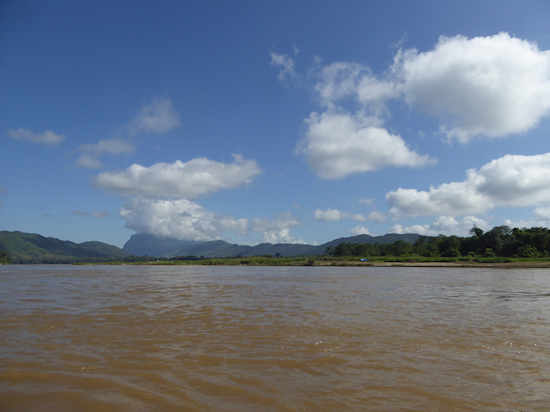 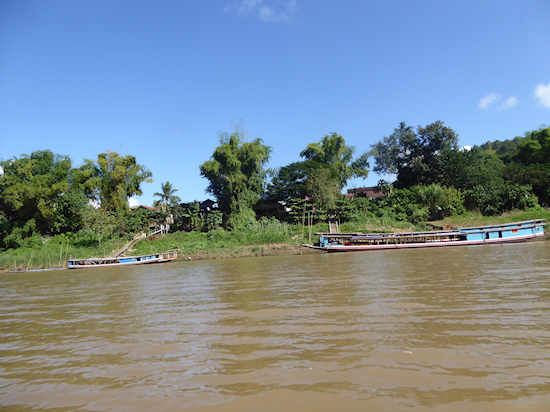 Along the way we passed several tiny little fishing villages where fishermen seem to used baskets for fishing. They were conical baskets and hung up in the garden. The scenery was spectacular as the region around the river was quite hilly and the hills were lush and green. There were other boats on the river, mostly commercial boats going to the same caves we were, but also boats that clearly belonged to some local people. We stopped along the way at a village of weavers that was unfortunately much too short to stop to really appreciate. It was kind of a shame for the people that so many tourists came through with so little time to actually buy anything. I would be angry if I were them. 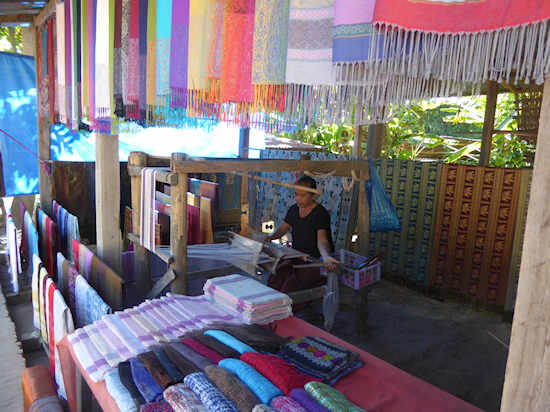 Then we continued our leisurely boat ride up the river until we got to the famous caves.

So in these caves people had been donating statues of Buddha for many years. Apparently it began as an animist place of devotion. It was believed that a River Spirit lives there. 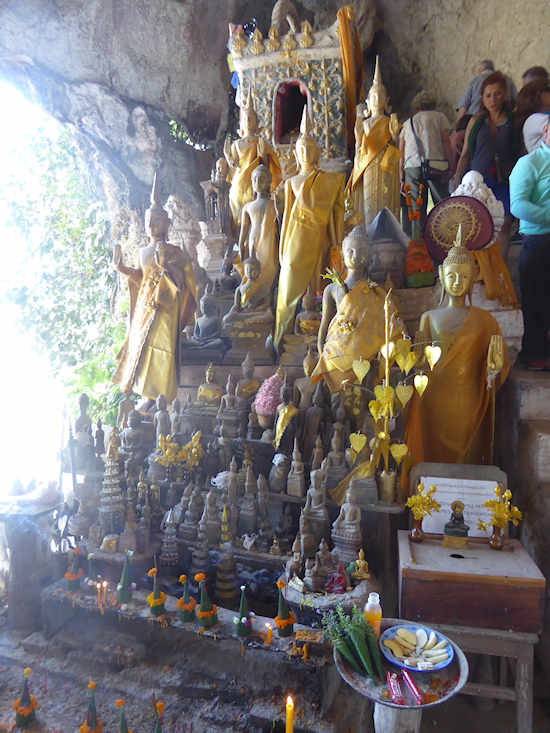 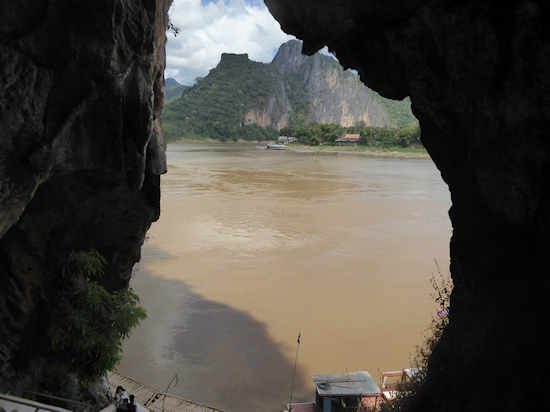 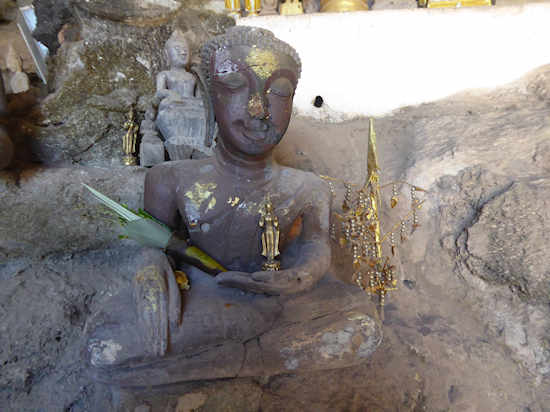 It was okay but it was really really crowded. The lower cave had more visible Buddhists and it was actually quite interesting once the crowds emptied out to head to the upper cave. I was the last to leave and of course it took me a while to climb the 200 steps to the upper cave. Along the way I thought thank god this is my last Temple that I’ll have to climb up to. I can’t say that it was really worth it as the upper cave was very dark and although you could get flashlights at the entrance the flash lights were kind of weak. Even the cell phone flashlights didn’t illuminate very much.

It was really not enough time to appreciate the spot. Not enough time at all actually. It was really they trip up there that was the best part particularly since there weren’t that many people in the boat. If the boat was full up I think it would not have been very agreeable at all.

I spent most of the afternoon napping and recuperating in the hotel and left this evening for dinner once again at Bamboo Tree. I had no idea that red rice could be sticky rice. 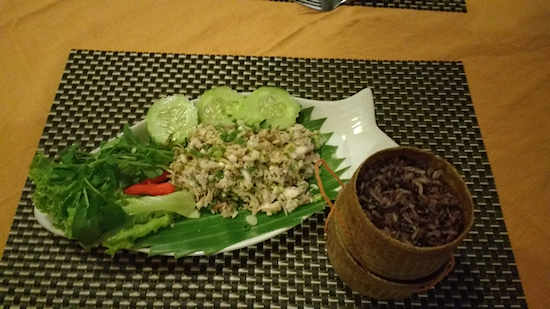 I was delighted to learn that they give a cooking course which I signed up for and I’m looking forward to it tomorrow.

After dinner I returned  to the hotel along the Nam Khan River. I had explored the banks of the Mekong but this river was smaller and more intimate. I realize that all of the tourist stuff that they insist you do here is really not the best part of Luang Prabang. The best part is the simple geography of the place as the old town is a little peninsula sandwiched between these two rivers. Strolling the riverbanks at night is endlessly delightful.