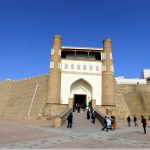 It’s great that the Hotel Mukhlisabegim, despite its modest rooms, is located just steps from the Lyabi Hauz square. This pretty square centers around a small pond. Bukhara is indeed an oasis city which made it a vital stop on the Silk Road. 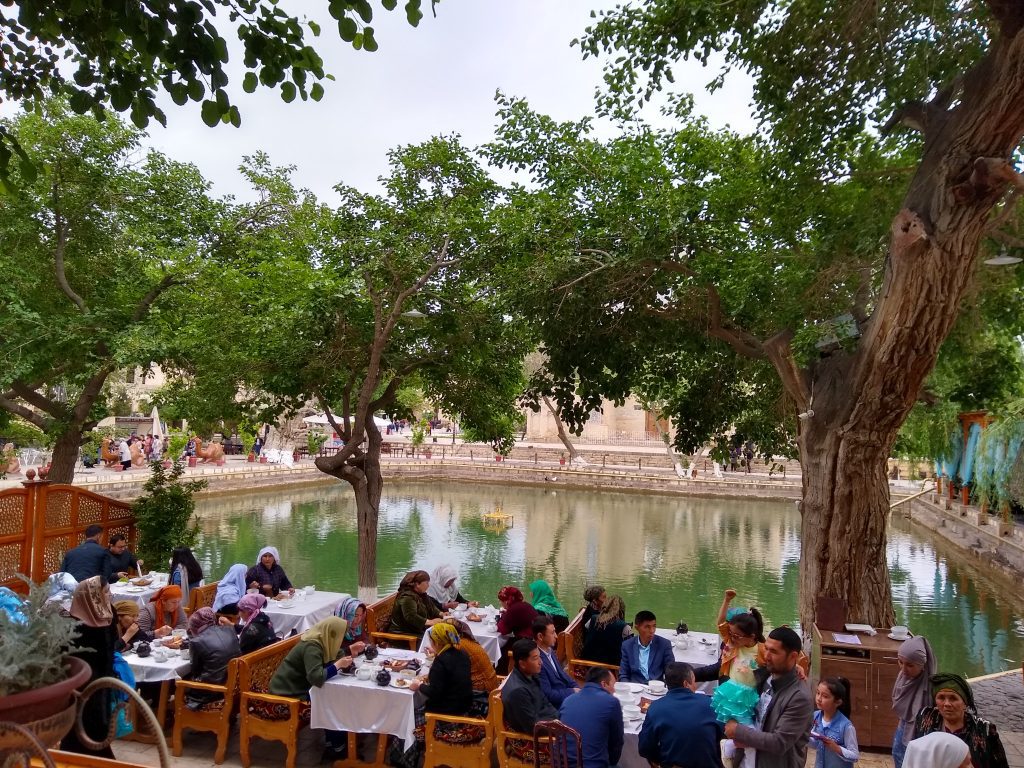 So I decided to just wander around for a bit this morning. Since I have time there’s no need to rush around checking sites off a list.

I strolled just about a hundred meters west and came to a peaceful spot centered around the Gaukushan Medressa. 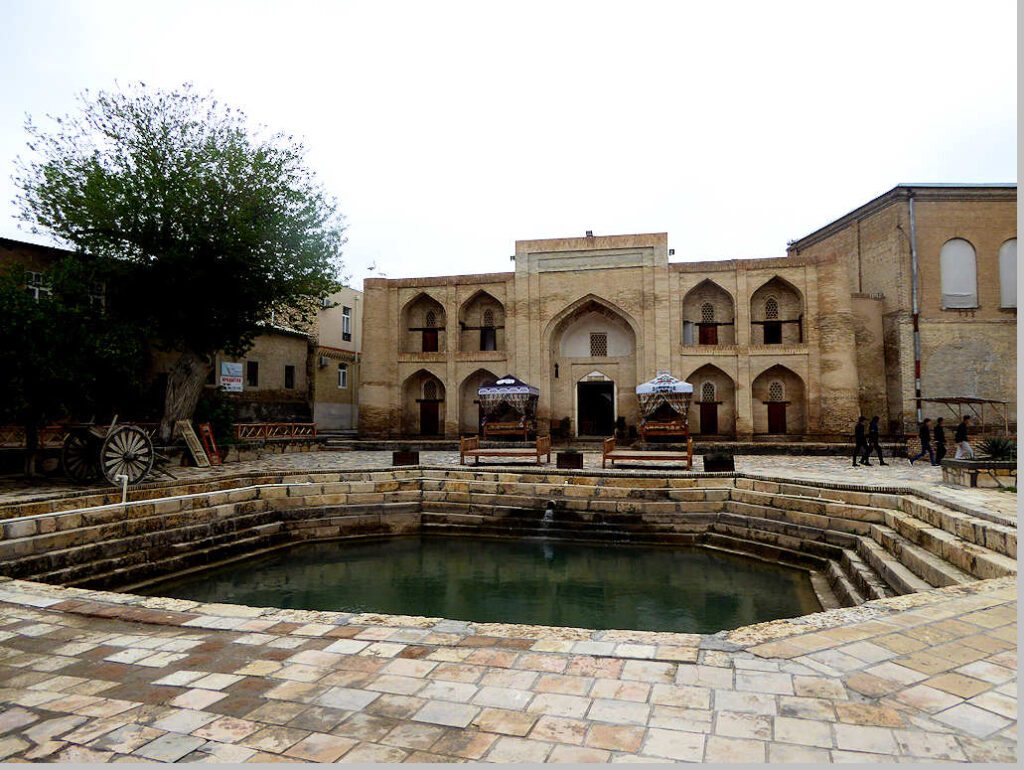 It’s right along one of the canals that was used to drain what had been the swamps of old Bukhara.

It was nearly empty as it’s not one of the more famous spots but it’s still quite attractive. 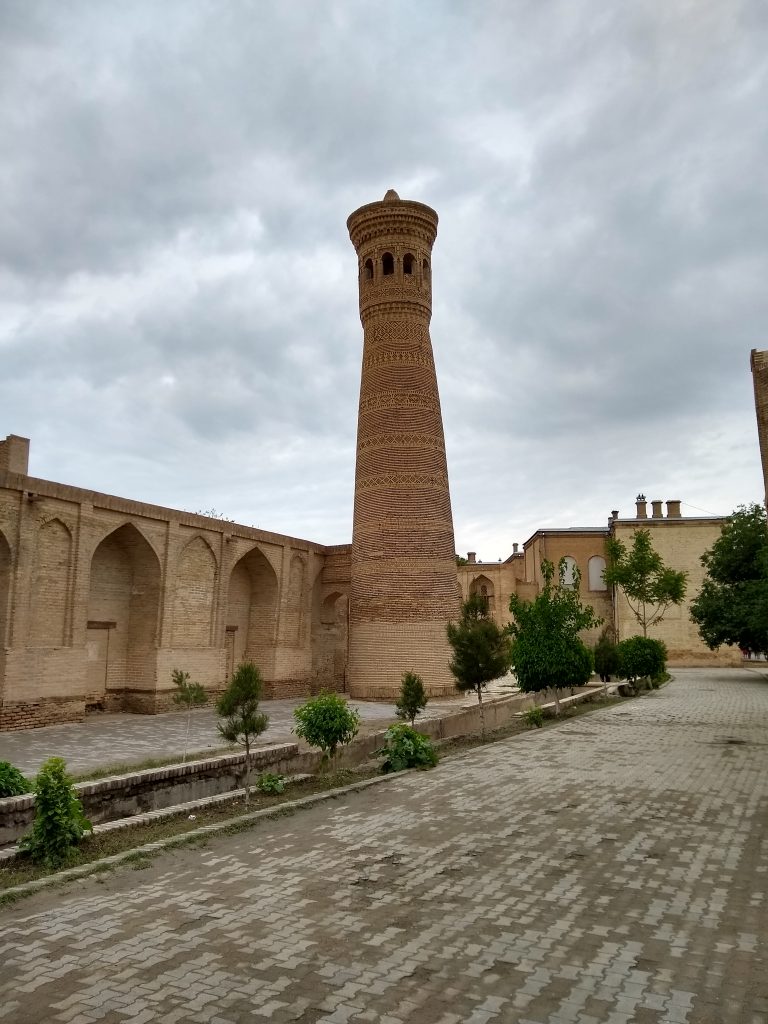 Soon I found myself in the ancient covered bazaars of Taki Sarrafon, Taki Telpak and Taki Zargaron.

The crafts on display in Bukhara are amazing. They do not display a lot of junk from China and India as they are quick to point out and they are also happy to be honest about whether something is machine made or handmade. Anyway it’s obviously authentic because there are a lot of variations in the designs. I perused stall after stall of silk scarves, silver jewelry, silk carpets, carved walnut boxes, and the particular designs known as suzani and ikat. There are also delicately painted reproductions of iconic scenes from the past as well as straw paintings, gold embroidery, hand-woven silk, ceramic tea sets and elaborate knives. In fact there are far more people working on crafts than there appear to be buyers for them. 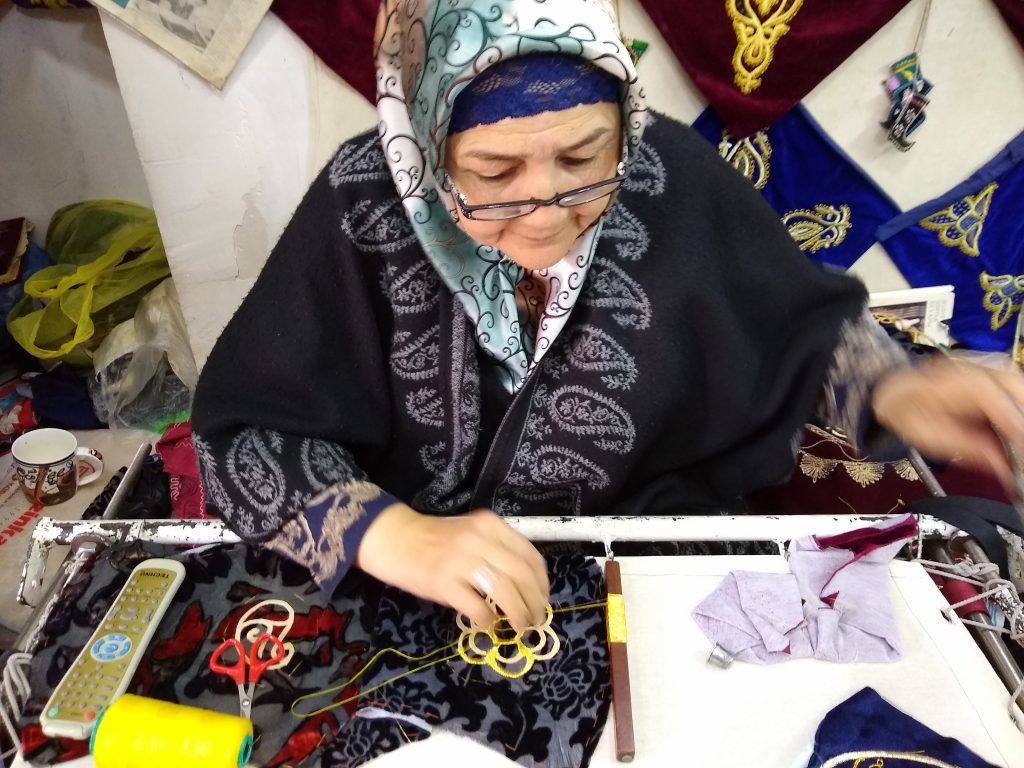 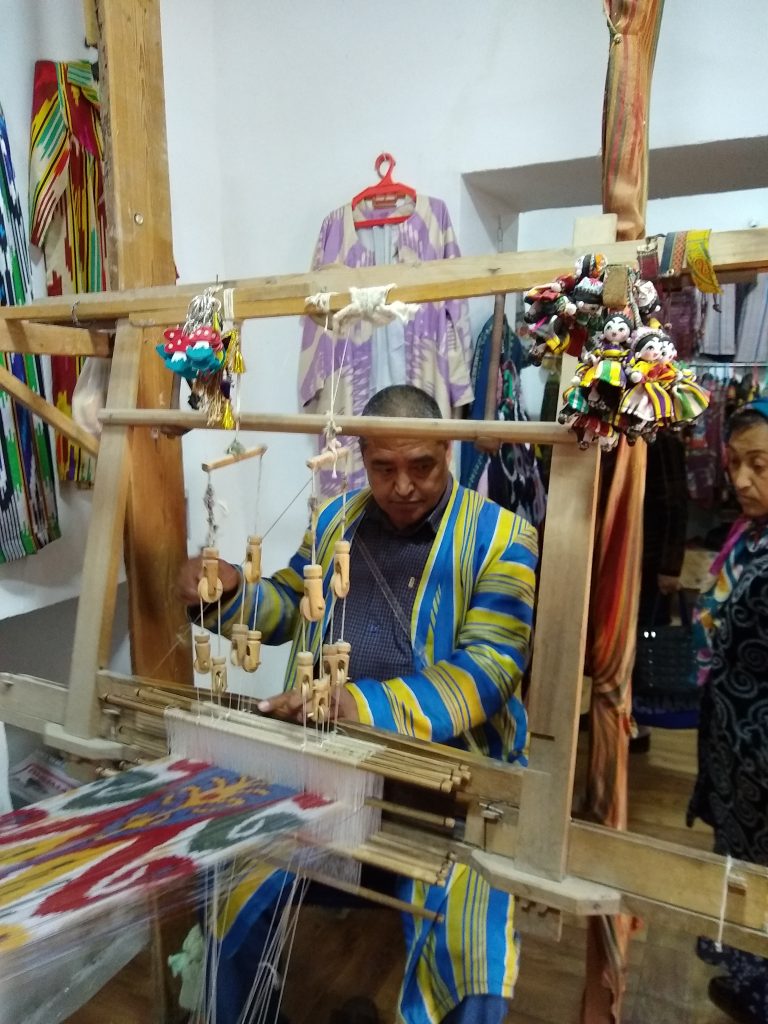 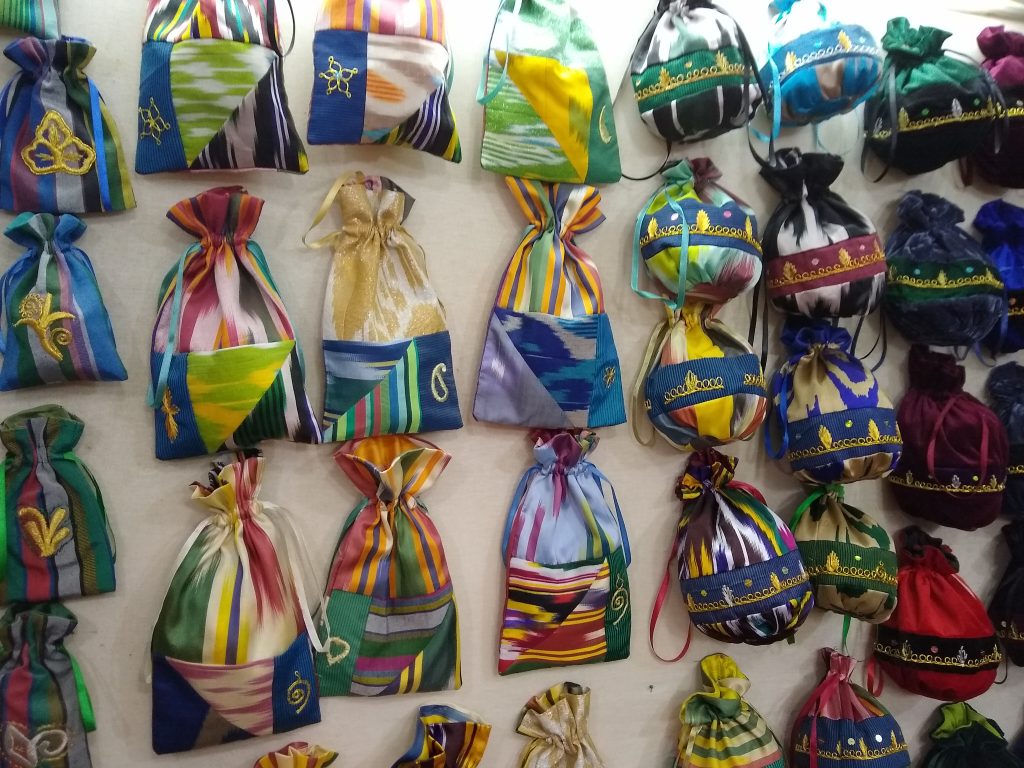 The bazaars are endlessly fascinating and because they’re covered it provides some shelter from the rain and drizzle.

I then wandered into one of Bukhara’s main sights, the Kalon Minaret, the Mir I Arab Medressa and the Kalon Mosque. As the sky was a dismal gray, I only gave it a cursory look. What I have learned is that the presence of sunlight makes a very large difference to appreciation of this Islamic architecture. The beautiful blue tiling is meant to sparkle in the sunlight. If you have to see things in the rain then so be it, but the effect is far more dazzling in the sun.

I headed back to town to grab some lunch at Budreddin. Although atmospheric and  friendly, I found the food was overpriced and not very good. By “overpriced”, I mean that I spent about $8 for vegetable dumplings, noodle soup and a beer. 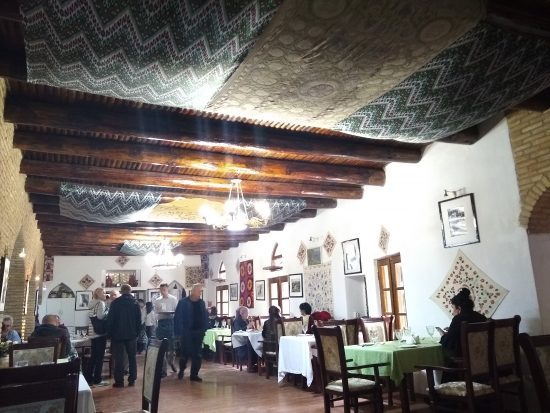 By the time I got to Bukhara’s other main site, The Ark, the sun blazed through the clouds. This gigantic fortress was the place where the Emirs of Bukhara held court until the last emir was chased out by the Bolsheviks in 1920.

The fort was fairly crowded but the rooms and exhibits managed to evoke palace life. 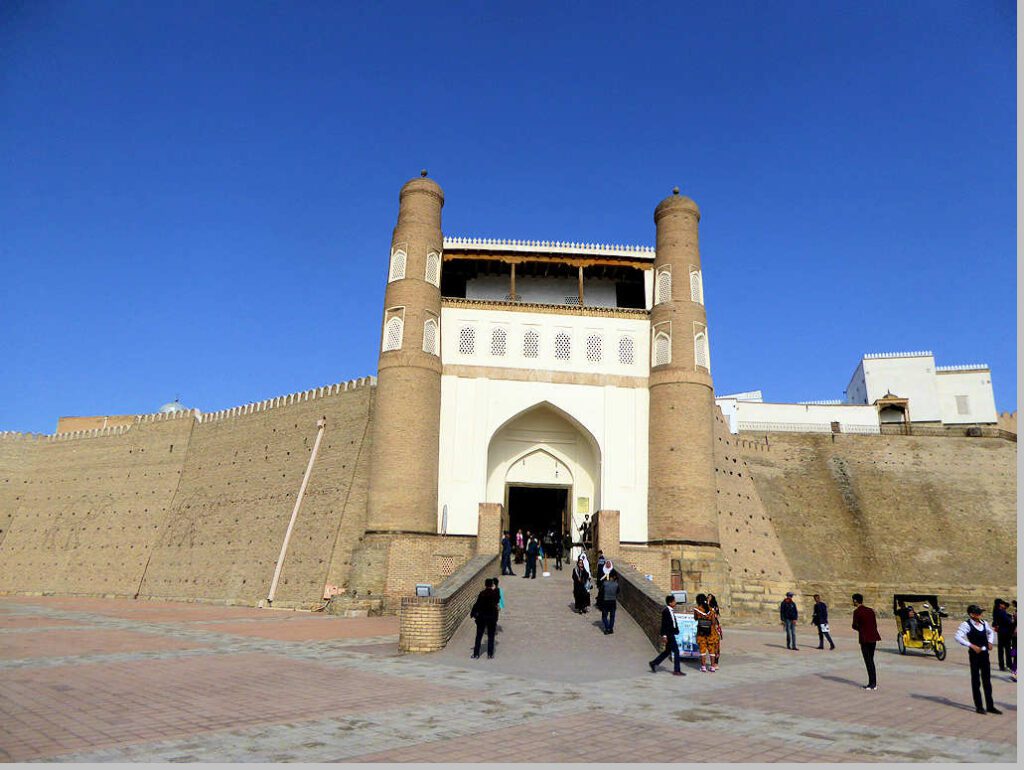 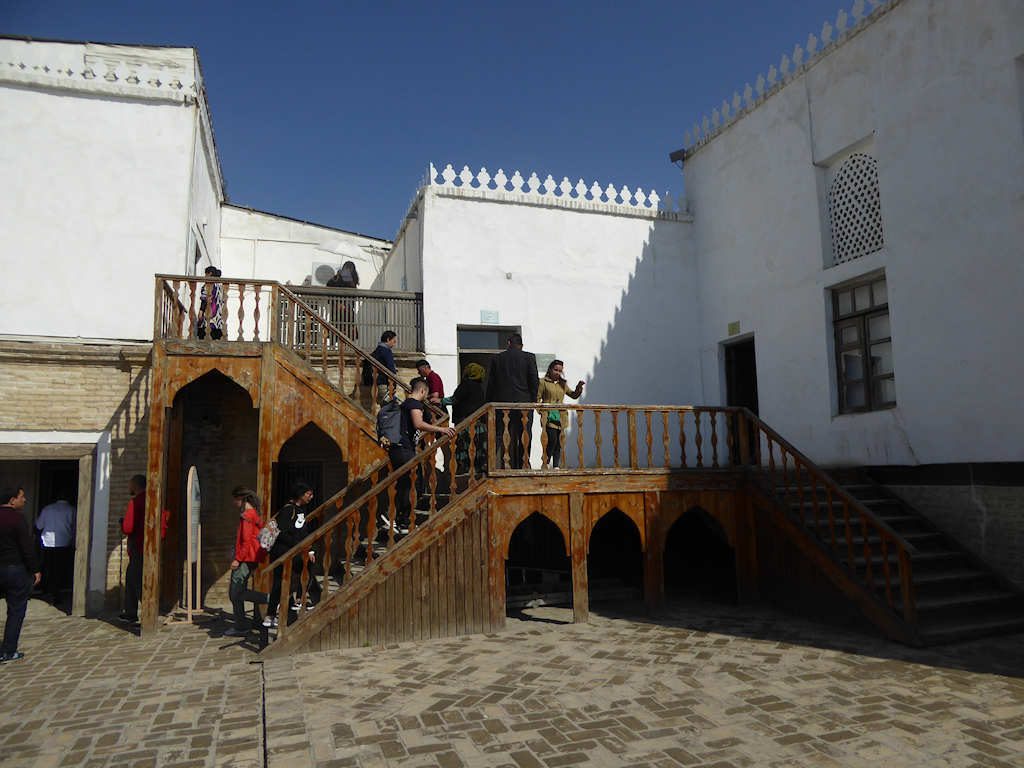 The Ark is Bukara’s oldest structure, occupied from the 5th Century right up until 1920 when it was bombed by the red army. Although heavily restored, it has some good photographs of the emirs and some of their victims including the two British diplomats, Connelly and Stoddart, who were imprisoned, tortured and ultimately beheaded. It was a major scandal at the time.

The palace walls were incredibly thick which leads one to believe that the emirs must have been worried about attacks.

Taking advantage of the beautiful sunlight I decided to walk back to the Kalon Minaret and mosque to take some pictures. 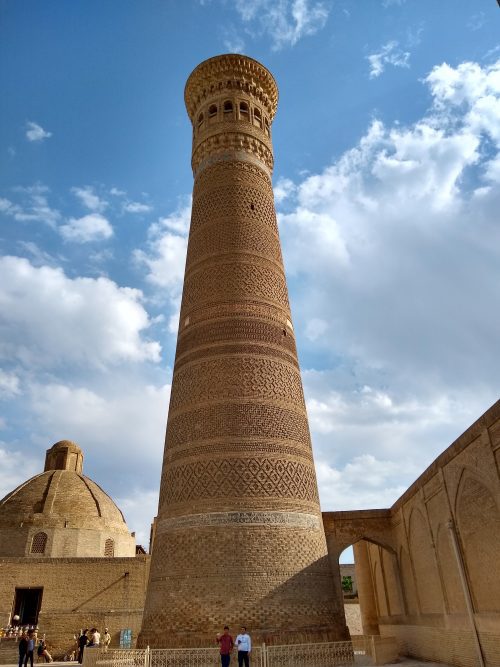 This minaret was built in 1127 and stands 47 meters tall with 10m deep foundations. It’s an architectural and engineering masterpiece. The 14 ornamental bands represent the first use of the glazed blue tiles that you can now see pretty much everywhere throughout Uzbekistan. Even Genghis Khan was so impressed with it that he didn’t reduce it to smithereens as he did almost every other damn thing in his path.

Sightseeing over, I headed back to this town center and decided to eat at a Lonely Planet recommendation called Old Bukhara. Like every other place, it was immensely crowded and there were no vegetable dishes left so I had to eat a traditional specialty here called Osh which is a rice pilaf with currants and spices topped with a lot of beef. It wasn’t particularly good and the service wasn’t particularly friendly but it filled me up.

No one comes to Uzbekistan for the food.